Defense not enough to take Cougars to Lexington 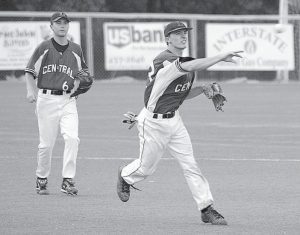 Strong defense was not enough to lift the Cougars in baseball state tournament action last week. The Letcher County Central Cougars made their firstever appearance in the Semi- State Tournament in Pikeville, the first appearance for a team from Letcher County since 1998 when the Fleming-Neon Pirates repeated as champions of the 14th Region and advanced to the State Baseball Sectional Tournament.

The best of three series began last Wednesday at the W.C. Hambly Athletic Complex in Pikeville, where Cougar pitcher Schylar Sexton faced Johnson Central’s Matt Fife. Fife recently signed a letter of intent to play college baseball for Eastern Kentucky University and had been clocked at throwing more than 90 miles per hour earlier in the season. Sexton acted as LCC’s ace this season, but would have to take his game to a new level against the Golden Eagles, who came into the tournament with a 25-12 record, one win better than the Cougars’ 24-12.

Matt Fife began his domination of the Cougar batters early, striking out his first two opponents before Colton Cook drove an opposite field single to right. Cook was stranded at first and became the first of two Cougars left on base throughout the entire game, and the first of only four total base runners for the Cougars.

Schylar Sexton pitched out a two-out jam in the bottom of the first after Johnson Central’s Chase Richardson lined a single to right field and advanced to second on Aaron Haney’s follow up base hit. Richardson stole third before Sexton forced a pop fly to centerfielder Jonathan Tucker for the final out of the inning.

Both the Cougars and the Golden Eagles went 1-2-3 in the second inning. In the top of the third, Letcher Central third baseman John Adams hit a twoout line drive to right field for the Cougars’ second hit of the game. Adams then safely stole second on the first pitch to Jonathan Tucker, but over-slide the bag and was tagged for the third out.

Sexton again saw trouble in the bottom of the third, when Johnson Central’s leadoff man, J.K. Ratliff, reached first base on an error and took second on a wild pitch. With Ratliff in scoring position with no outs, JC catcher Taylor Smith hit a hard ground ball to third to a diving John Adams. Adams came up with the ball and threw Smith out at first, holding Ratliff at second. Sexton went on to add another base runner with a two-out hit by pitch before giving up an infield fly ball to Cougar second baseman Colton Cook for the third out.

Johnson Central pitcher Matt Fife began to cruise in the top of the fourth, tearing through the Letcher Central offense striking out eight of his next 10 opponents, including the first seven straight Cougar batters over the next three innings.

Schlar Sexton’s masterful work needed little help from his offense, though. He escaped the fourth and fifth innings, surrendering one walk in each inning before recording the third out. However, he needed a little help from his defense in the bottom of the sixth, where with no outs and runners at first and second, JC’s Justin Blanton’s sacrifice bunt popped behind the plate. Cougar catcher McKenzie Smith dove to full extension to catch the short pop up to record the first out. Pitcher Matt Fife loaded the bases with a one-out infield single to a sliding Cougar third baseman, Jon Adams. Adams’s slide saved a run that would have easily scored from second. The inning ended with a line drive to second baseman Colton Cook, who snagged the hit and passed to ball to shortstop Tanner Sexton for the double play.

With Mike Hogg stranded on second following his stand-up double to left field and no runs by the Golden Eagles, the seventh inning ended with no score and the game went into extra innings. LCC shortstop Tanner Sexton’s groundball to short was fielded cleanly but was thrown over the first baseman’s head and into the Cougar dugout, allowing Sexton to reach first safely and be awarded second base. Pitcher Schylar Sexton moved the other Sexton to third on a sacrifice bunt, setting up a one-out squeeze bunt by Chase Adams. Tanner Sexton scored on Adams’s squeeze bunt and put the Cougars finally ahead, 1-0. That run was all the Cougars needed as the Johnson Central hitters went down in the bottom of the eighth without scoring to give the Cougars the game one win.

Johnson Central’s Matt Fife struck out 15 Cougar batters in the game and allowed only three hits. Letcher Central’s Colton Cook and John Adams each recorded a single and Mike Hogg had a double in the game. There were no walks for the Cougars.

Schylar Sexton allowed six hits, two walks, and hit one batter with a pitch in his eight-inning complete game. Sexton struck out four.

Johnson Central’s bats showed up early for game two as the Golden Eagles jumped on top of the Cougars 4-0 early in the game before handing them a 5-0 defeat.

With the series tied at one game apiece, Johnson Central wasted little time in pouncing on the Cougars. A three-run third inning and one-run fourth lifted the Golden Eagles above the Cougars, who did not score until the fifth inning when Letcher Central’s Jonathan Tucker doubled to left center to lead off the inning and score on Colton Cook’s infield single.

Johnson Central opened the gap again with a run in the fifth. With the score 5-1, Letcher Central designated hitter Adams singled to lead off the inning and later score on John Adams’s oneout single to left. Adams himself scored when forced in on a basesloaded walk to Jeramy Johnson. The Cougars left the bases loaded, trailing 5-3, before going on to drop the third and final game by a score of 6-3. The Johnson Central Golden Eagles will go on to face Paul Dunbar High School in the State Tournament in Lexington this week.