Degree from SKCTC leads to her success 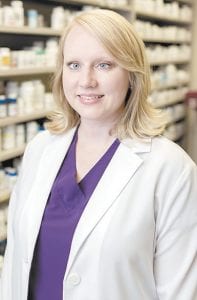 Anyone who visits the pharmacy at Whitesburg Appalachian Regional Hospital has been greeted by Falon King Bentley’s warm smile. The 2007 graduate of Southeast Kentucky Community and Technical College (SKCTC) has a lot to smile about. Not only does she enjoy a successful career as a pharmacist, but she and her husband Joshua live in Ermine with their two children Jackson, 15, and Harper, 6.

Bentley will quickly share, however, that the road to her success has had its challenges.

“My son Jackson was born during my second year of college. I had to raise him as a single parent and still continue my education,” she says.

Fortunately, SKCTC provided her with the opportunity to do just that. She says the college “offered a wonderful education that was flexible enough for my schedule and fit perfectly into my busy life.” By taking classes online and on campus, she was able to complete her associate degree.

As a young mother, Bentley struggled financially, but she was able to earn scholarships through the college. She also earned income through the workstudy program as a tutor and a lab assistant for the late Dr. Ken Campbell. He became a favorite professor as well as a mentor. “We had many talks in his lab, and his advice was key to getting me where I am now,” she says.

Bentley credits Dr. Campbell with her decision to attend pharmacy school. Her original plans were to become a physical therapist assistant. However, one day she mentioned that she kept taking chemistry classes she didn’t need just because she enjoyed them. He asked, “Why don’t you consider pharmacy school instead?” Says Bentley, “I had one of those ‘why didn’t I think of that?’ moments.” He told her about the new school opening in Virginia and helped her to apply.

In 2010, Bentley was graduated from the Appalachian College of Pharmacy. For the next two years, she worked as a hospital pharmacist at Hazard ARH, and since 2012, she has held her current position in Whitesburg.