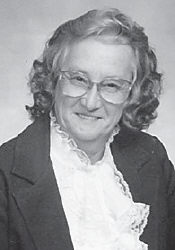 She was the daughter of the late Henry and Ollie Shepherd Melton.

Funeral services were held February 26 at the Mt. Olivet Baptist Church at Cornettsville. Burial was in the Rest Haven Cemetery at Jeff.