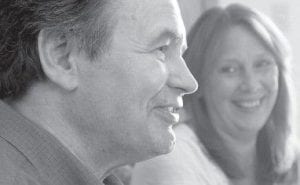 Former Illinois Congressman Lane Evans, seen in this photo taken last month, is one of more than 35 million people in the world who suffer from some type of dementia. Evans, who is 58 and suffers Lewy Body Dementia, served 12 terms in Congress. (AP Photo/The Dispatch)

More than 35 million people around the world are living with Alzheimer’s disease or other types of dementia, says the most in-depth attempt yet to assess the brain-destroying illness — and it’s an ominous forecast as the population ages.

The new count is about 10 percent higher than what scientists had predicted just a few years ago, because earlier research underestimated Alzheimer’s growing impact in developing countries.

Barring a medical breakthrough, the World Alzheimer Report projects dementia will nearly double every 20 years. By 2050, it will affect a staggering 115.4 million people, the report concludes.

“We are facing an emergency,” said Dr. Daisy Acosta, who heads Alzheimer’s Disease International, which released the report this week.

The U.S. and other developed countries long have been bracing for Alzheimer’s to skyrocket. But the report aims to raise awareness of the threat in poorer countries, where finally people are living long enough to face what is mostly a disease of the 65-and-older population.

While age is the biggest driver of Alzheimer’s, some of the same factors that trigger heart disease — obesity, high cholesterol, diabetes — seem to increase the risk of dementia, too. Those are problems also on the rise in many developing countries.

In poorer countries, “dementia is a hidden issue,” Acosta said, and that’s complicating efforts to improve earlier diagnosis. “You’re not supposed to talk about it.”

For example, the report notes that in India, such terms as “tired brain” or “weak brain” are used for Alzheimer’s symptoms amid widespread belief that dementia is a normal part of aging — when it’s not.

That mistake isn’t confined to the developing world. Even in Britain, the report found, just over half of the families caring for someone with dementia believed the same thing.

But since 2005, a flurry of research on Alzheimer’s in developing countries has been published, leading Alzheimer’s Disease International — a nonprofit federation of more than 70 national groups — to ask those scientists to re-evaluate. After analyzing dozens of studies, the scientists projected 35.6 million cases of dementia worldwide by 2010.

The report puts North America’s total at 4.4 million, although the Alzheimer’s Association of the U.S. uses a less conservative count to say more than 5 million people in the U.S. alone are affected. The disease afflicts one in eight people 65 and older, and nearly one in two people over 85.

The report forecasts a more than doubling of dementia cases in parts of Asia and Latin America over the next 20 years, compared with a 40 percent to 60 percent jump in Europe and North America.

The report urges the World Health Organization to declare dementia a health priority and for national governments to follow suit. It recommends major new investments in research to uncover what causes dementia and how to slow, if not stop, the creeping brain disease that gradually robs sufferers of their memories and ability to care for themselves, eventually killing them.

There is no known cure; today’s drugs only temporarily alleviate symptoms. Scientists aren’t even sure what causes Alzheimer’s.

But major studies under way now should show within a few years if it’s possible to at least slow the progression of Alzheimer’s by targeting a gunky substance called beta-amyloid that builds up in patients’ brains, noted Dr. William Thies of the U.S. Alzheimer’s Association. His group is pushing for an increase in U.S. research spending, from just over $400 million to about $1 billion.