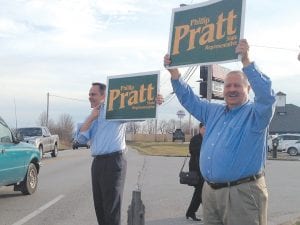 Democrats won three of four special House elections on Tuesday, dealing a blow to Republican takeover attempts and solidifying power in the last legislative chamber in the South the party still controls.

Just four months ago, the party lost four of six statewide elected offices in a debacle that led to two of its members switching parties in the House in what looked like the beginning of a Republican power grab. But Tuesday’s victories energized a Democratic party that once dominated Southern politics with its coalition of conservative, mostly rural Democrats who preach states’ rights and limited government.

Democrats successfully defended seats in Greenup County near the border with Ohio and West Virginia and Christian and Trigg counties near the border with Tennessee. Those seats were vacated when new Republican Gov. Matt Bevin appointed their representatives to a pair of well-paid state jobs, sensing an opportunity to build on the momentum of his unexpected election in November.

But Republicans failed to hold a seat in central Kentucky that was vacated by a popular young conservative who was elected the state’s agriculture commissioner in November. Republicans’ only win of the night came in Boyle and Casey counties, where attorney Daniel Elliott defeated former Navy fighter pilot Bill Noelker

The victories give Democrats 53 of 100 seats in the House of Representatives. However, Republicans will try again in November, when all 100 seats will be up for re-election.

“With 91 Republicans on the ballot this fall, and with either Bernie Sanders or Hillary Clinton on the ballot as well, we like our odds in November,” Bevin wrote on his Facebook page.

In Greenup County, Democrat Lew Nicholls defeated Republican Tony Quillen in a district that hinged on union politics. Nicholls credited organized labor and public school teachers for powering him to victory in what he described as a rebuke of new Republican Gov. Matt Bevin’s policies.

“There was a lot at stake, and these are stakeholders in our community and they got out and they worked hard,” Nicholls said.

The victory by Democrats assures they will have at least the 51 votes they need to pass a budget that will most likely roll back most of Bevin’s proposed $650 million in spending cuts. Bevin has proposed using the savings to begin to pay down the state’s multibillion-dollar pension debt.

“The Republicans are not funding education like they should in Frankfort,” said 67-year-old Janet Covington, who voted for the Democratic candidate in Scott County on Tuesday.

The winners can take the oath of office immediately after the State Board of Elections certifies the results at 1 p.m. on March 15. That just happens to be the day House Democrats plan to release their proposed budget.

State Rep. Sannie Overly, who lost to Gov. Matt Bevin in November as Democratic nominee Jack Conway’s running mate, said in a news release the results were “a repudiation of Gov. Bevin’s efforts to dismantle public education and health care.” But later, Stumbo seemed to walk those comments back in anticipation of working with Bevin and the Republican controlled Senate to pass a budget in the next few weeks.

“We’re not in any way, form or fashion going to say that this is some sort of repudiation of Gov. Bevin. He has not been in office that much,” Stumbo said. “What it says is that people in Kentucky want us to work together.”

Democrats poured all of their resources into Tuesday’s special elections, including Democratic President Barack Obama. The president recorded a robo call urging voters to elect African-American Democrat Jeffrey Taylor in Hopkinsville because “Jeff Taylor will protect your health insurance, not take it away,” according to a report in The Richmond Register.

Hopkinsville, where Taylor lives, has one of the largest African-American populations in the state. Taylor won convincingly over Republican Walker Thomas, the owner of a local roller rink.