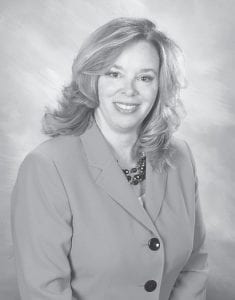 The women in leadership for Appalachian Regional Healthcare are a diverse group of strong, accomplished, intelligent women. Despite having these characteristics in common, each of them is unique, taking on a completely different set of responsibilities and challenges when they walk through the doors of ARH each day. From administrative responsibilities, to nursing and caring for patients, to the creation of new initiatives allowing ARH’s reach to grow, these women are nothing short of incredible.

ARH is a very tight-knit community, as are the towns each facility is located in. It is common to hear locals say they were born at an ARH hospital. This connection is part of what fosters the sense of pride and passion each ARH employee has for their work. Dena Sparkman was born at McDowell ARH and grew up in Wheelwright, just 12 miles from the hospital. After spending stints of time in Durham, N.C. and Lexington, Mrs. Sparkman was excited to return home in 1993 to begin her career with the organization where it all began. After almost 25 years, and a variety of leadership roles she currently serves as the Community CEO at Whitesburg ARH.

In this role, Mrs. Sparkman is operationally responsible for the hospital and clinical operations on campus. In addition to the hospital, three clinics fall under her jurisdiction: one on the hospital campus, a cardiology clinic located nearby and one in Jenkins.

“I once had a mentor say to me that there is no substitute for brains,” Mrs. Sparkman says. “To be a community CEO you have to have a varied background with knowledge about the hospital, community and clinics. You need both people skills and financial skills.”

Mrs. Sparkman always planned to enter the healthcare field and originally pursued her undergraduate degree in biology at Alice Lloyd College. She then attended medical technology school at Duke University with plans to work in the lab after graduation. For about six months, she worked in the lab, ultimately deciding it wasn’t the career for her. She continued her education by completing her master’s degree in healthcare administration at the University of Kentucky. During the last year of her master’s program, Mrs. Sparkman’s instructor passed around a flyer for an administrative fellow position with ARH and she jumped at the opportunity to return home.

“I asked her to hand the flyer over to me and I decided that position was mine, I was going home!” Mrs. Sparkman says. “My parents and the rest of my family were in eastern Kentucky and that’s where I wanted to be.”

She was hired as administrative fellow. In this position she learned hospital administration through hands-on experience working for six months in the corporate office and six months out in the field.

“It’s never the same day twice and it’s never a boring day in healthcare,” she says. “There’s always something unexpected and I think one of the reasons I love it is because you get to help people.

You make decisions and do things that impact their lives, and that’s powerful. It may not just be patients, it may be employees. It’s always something different and I love that.”

Mrs. Sparkman’s passion for healthcare stems from her experience with severe asthma as a young girl. Asthma attacks would send her to the emergency room regularly where she met her special nurse, Shelby Jean Boyd. Her nurse was sure to give her medicine and oxygen and once she was feeling better, Shelby Jean would pop popcorn and they would spend time talking and catching up.

“I’ll just never forget, when I saw her I knew it was going to be alright if she was there,” Mrs. Sparkman says. “It didn’t matter to me which doctor was there, if Shelby Jean was there everything was going to be great. Because of her I tell people, never underestimate the impact you’re going to have on someone because 30 years later I’m still talking about Shelby Jean.”

Today, Mrs. Sparkman loves volunteering her time mentoring kids in the community. Together they work on resumes, interview skills and talk through the details of different career paths. Whether they are interested in the healthcare field or something else, she loves giving back to the community in this way.

“There have been a lot of people who have served as mentors in my life,” she says. “I think everyone needs a mentor, someone they can call and bounce ideas off of in a non-punitive way. It’s your one get out of jail free card, someone you are comfortable with that you can sharpen your skills against in a way that is good for both parties.”

Mrs. Sparkman loves her job, but also makes time for work-life balance. Outside of her volunteer work, she is an avid reader, loves to go to the movies, her son’s marching band events, and spending cozy nights in doing jigsaw puzzles.

“In order to make the work-life balance work, you have to realize that you’re only one person and you can’t do it all,” she says.

When asked what advice she has for a young woman interested in entering the healthcare field she had this to say:

“Try it, you might like it. I think more young women should try it and not be intimidated by the environment.”

Whitesburg ARH is lucky to have such a driven, hardworking and well-rounded Community CEO in Dena Sparkman.