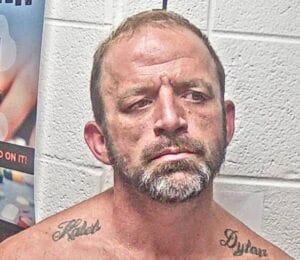 Anthony “Shag” Creech was arrested this week and charged with two burglaries between Isom and Blackey.

A Letcher County man has been arrested after reports of at least two thefts Monday night between Blackey and Isom.

Anthony “Shag” Creech, 43, was arrested Tuesday on KY 588 at Blackey, and charged with second-degree burglary.

Creech is accused of entering through the back door of a house on Redbud Lane at Isom around 8:30 p.m. while the homeowners were painting in another room. The burglar took a set of keys that were lying on the table, and ran when the dogs at the home chased him. The homeowner confronted the burglar with a gun and got the keys back, after which the burglar ran toward the ballpark. The homeowners then found out someone had also been searching through one of their cars before the keys were taken. Kentucky State Police responded to the scene, but were unable to locate the man Monday night.

Police and neighbors also said a man matching the same description stole items from a car in the Twin Bridges neighborhood on KY 7 South at Letcher earlier in the evening, and the resident identified the person he saw as Creech.