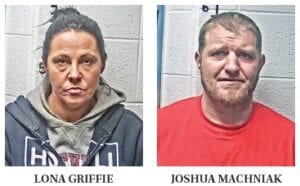 Deputies recovered 50 grams of methamphetamine worth an estimated $5,000 during two arrests over the weekend.

One person arrested had 10 grams of meth, while the other had 40 grams, Sheriff Mickey Stines said. Any person who possesses more than 2 grams of methamphetamine is considered to be trafficking, a Class C felony punishable by up to 10 years in prison.

According to court documents, Deputy Seth Whitaker answered a complaint Friday at Mountain Breeze Apartments in Jenkins that a man who had been banned from the property was in an apartment there. Whitaker wrote in a citation that when he arrived, the man’s girlfriend told him the man had kicked her out of her apartment, and management confirmed that he was trespassing. Whitaker arrested him and searched the area. According to the citation, he found containers with 10 grams of a substance believed to be methamphetamine, some marijuana seeds and a dollar bill with a white powdered substance on it.

Whitaker arrested Joshua D. Machniak, 34, of 43 South Abdoo St. in Neon, and charged him with first-degree possession of a controlled substance, first offense, (methamphetamine); possession of drug paraphernalia; possession of marijuana; and trespassing. Stines said Machniak was not charged with trafficking initially because the deputy did not have scales to measure the amount of the drug found until after he had already arrested and charged him.

Machniak was also wanted on indictment warrants for third-degree assault on a police officer; first-degree possession of a controlled substance, first offense, (methamphetamine); being a persistent felony offender; two counts of possession of drug paraphernalia; public intoxication; first-degree bail jumping; another charge of being a persistent felony offender; and failure to appear to answer several traffic violation charges.

The next night, Deputy James Norris pulled over a car at Isom for a missing taillight and found the license plate was not valid. After checking the vehicle identification number, he found the car had been reported stolen in Tennessee. According to the citation, the driver, Lona Griffie, 40, of 11173 HWY 160, Kingscreek, told Norris there was “dope” in the car, and when he asked what kind, she replied it was “ice,” a common slang for methamphetamine.

Stein said when Norris searched the vehicle, he located 40 grams of methamphetamine; pills including Klonopin, Lyrica, and Neurontin; empty plastic baggies; and a digital scale.