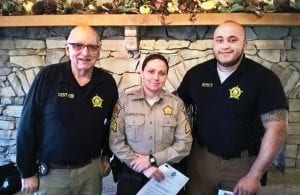 Sheriff Danny Webb (left), who will retire in January as Letcher County’s longest serving sheriff, awarded deputies Alisha Congleton and Sidney Fields with commendations for meritorious service for an investigation that netted $180,000 worth of high-quality crystal methamphetamine during a raid in March at Bottom Fork. Fields was also awarded a ribbon recognizing his deployment last year to Afghanistan with the U.S. Army Reserves. The awards were given during the department’s Thanksgiving dinner at Pine Mountain Grill in Whitesburg. (Photo by Sam Adams)