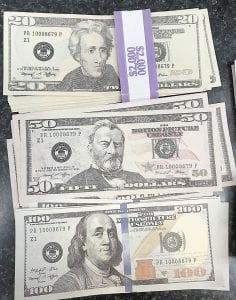 Pictured here are some of the counterfeit bills confiscated by Letcher County Sheriff ’s deputies during the search of a Millstone home Tuesday. The search netted at least $27,000 in fake money. (Eagle photo)

Letcher County Sheriff ’s deputies confiscated about $27,000 in counterfeit money from a Millstone home Tuesday afternoon, but are cautioning merchants that at least $19,000 in fake $20, $50 and $100 bills remain unaccounted for.

“Citizens need to be vigilant and pay close attention” when accepting or exchanging any type of cash, Chief Deputy Sheriff Barry Engle said late Tuesday afternoon after he and other deputies charged a 40-year-old Millstone man in connection with the case.

According to Engle, police found at least $27,000 in fake bills earlier Tuesday during a search of the home of Jeffrey H. Hampton, of 270 Lick Fork, Millstone. Hampton was charged with first-degree criminal possession of a forged instrument after the fake money was found during a search of his home. Hampton told the deputies he had already given away $19,000 worth of the counterfeit bills to at least five friends.

Engle said Deputy Sheriff Eugene Slone opened an investigation into the circulation of counterfeit money in Letcher County after Deputy Alisha Congleton responded to a call from the Dollar General Store at Mayking, where one of the fake $100 bills turned up on July 20. On the same day, Fleming-Neon Police Chief Mike Dingus answered a complaint at the Neon Vendors Mall at Neon Junction after a vendor there was paid with a fake $50 bill.

On July 27, Deputy Sheriff Mike Enfusse answered a call at the Ermine Double Kwik after clerks there confiscated a counterfeit $100 bill from a customer who tried to use it there.

“On July 31, Deputy Congleton received information from a source who said the suspect from Millstone (Hampton) was the source of the bills,” said Engle. “Deputies Enfusse, Congleton and Sydney Fields went to the home on Lick Fork and were given permission to search. During the course of the search the deputies located approximately $27,000 in counterfeit currency printed in China.”

Several of the counterfeit bills have Chinese writing on both sides of them, while others have “FOR MOTION PICTURE USE ONLY” printed on them. Still, hurried store clerks all across the United States have been accepting the bills as real since at least 2016. The Letcher County deputies believe Hampton ordered the bills over the Internet. 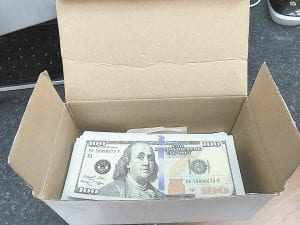 After the counterfeit bills turned up in Green Bay, Wisconsin in June, police there determined that the bills with Chinese writing on them are used by Chinese banks to help train their staff on how to count American money.

“We’ve had some businesses, then an hour of so after a transaction occurs, either they’re doing their safe drop or whatever, and they suddenly realize, oh my goodness, that is not real money,” Green Bay Police Lt. Rick Belanger told WBAY-TV on Jun 7.

Fake bills that carry the words “FOR MOTION PICTURE USE ONLY” have been circulating over much of the U.S. recently, including Texas. In May, police in Brenham, Texas confiscated a number of phony $20 with those words written on them and found the money could be purchased on Internet sites for as little as $9.80 per package.

Deputy Engle reported Tuesday’s discovery of phony money to the U.S. Secret Service’s field office in Lexington and was told an agent would be in Whitesburg to look into the matter sometime soon.

Engle said he hopes that the friends of Hampton who are holding the fake cash turn it over to sheriff ’s deputies before they face criminal charges. He asks that anyone with any information about the counterfeit bills call him at 633-2293.

“It is our intent to present this case to the next Letcher County Grand Jury,” Engle said. “There may also be federal charges.”

The arrest citation naming Hampton says he “had approximately 27,000 dollars of counterfeit money matching the description of bills being passed throughout the county at local businesses.”