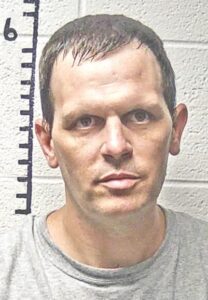 Deputy Sheriff Seth Whitaker pulled over a car near the Dairy Queen on August 25 and charged Mark Can Bentley, 39, of Mousie, with possession of drug paraphernalia, prescription drugs not in the proper container, trafficking in a controlled substance (more than 2 grams of methamphetamine) and trafficking in heroin.

Whitaker said in the warrant that he attempted to make a traffic stop of Bentley’s car and that Bentley threw a camouflage bag out the window before he was able to catch up with the vehicle.

Whitaker said a passenger told him that Bentley had thrown the bag out, and he was able to find it later to discover it contained drugs. Bentley is still being held in the Letcher County Jail.