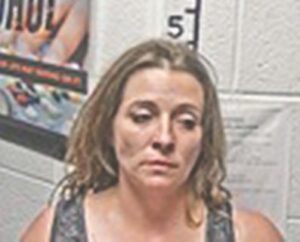 A Whitesburg woman is facing an auto theft charge and multiple other charges after a deputy said he saw her punching a gas pump.

Letcher County Deputy Sheriff James Norris said in the citation that he saw 4-foot-10-inch Bobbie Stamper, 38, of Whitesburg, standing at the old Sugar Shack Double Kwik in West Whitesburg punching the gas pump. Norris said when he confronted her, she cursed at him and tried to get back into a green Chevrolet

S-10 pickup truck that Norris then found out had been taken from the home of Dominic Cummings of Whitesburg, the citation says.

Norris said when he pulled her out of the truck and put her on the ground, she lay on her hands and refused to pull them out. Norris said he that after “prying her hand from under her, I was able to put the cuffs on her.”

Stamper was charged with theft by unlawful taking over $500 but less than $10,000, public intoxication, resisting arrest and first-degree disorderly conduct. She was placed in the Letcher County Jail.