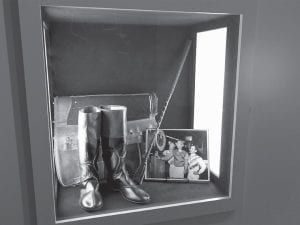 This photo shows a display at “Shoemaker: Start to Finish” at the Kentucky Derby Museum in Louisville. The exhibit carries visitors down memory lane, spanning the 40-plus-year career of Bill Shoemaker, a pint-sized man who became a giant in thoroughbred racing history. (AP Photo/Kentucky Derby Museum)

Just a short stroll from the famous track at Churchill Downs, where he rode to four victories in the Kentucky Derby, some of Bill Shoemaker’s most treasured items are on display for racing fans making a pilgrimage to the famous racetrack.

The special exhibit — titled “Shoemaker: Start to Finish” — opened Monday at the Kentucky Derby Museum and carries visitors down memory lane, spanning the 40-plus-year career of a pintsized man who became a giant in thoroughbred racing history.

Visitors stroll past glass cases filled with trophies, scrapbooks and riding gear worn by the late Shoemaker, who rode in more than 40,000 races and won 8,833 of them in a Hall of Fame career. Photos ringing the exhibit chronicle his achievements.

One photo shows an exuberant Shoemaker after he won the 1986 Derby aboard Ferdinand. The triumph made Shoemaker the oldest jockey, at age 54, to win the Run for the Roses. The garland of roses is draped around his shoulders, his right fist pumped in triumph.

The Derby Museum, situated just off Gate 1 at Churchill, received the nearly 550-piece collection from Shoemaker’s daughter, Amanda Teal. It’s the first time most of the pieces have been put on public display.

The exhibit comes as Derby fever nears a crescendo in this charming city by the Ohio River, which spends three weeks celebrating a two-minute horse race, and where race horses, and their jockeys, are seen as prime athletes. This year’s Derby is May 7.

“I am beyond excited to see it all come together,” Teal said in emailed comments. “He was an extraordinary father, athlete and person. I’m grateful to have his legacy celebrated and preserved for all racing fans.”

The exhibit has three themes — Shoemaker’s family life, racing career and celebrity status. Shoemaker gained prominence in the 1950s and 1960s, when thoroughbred racing was a leading spectator sport. As a result, he was in demand by advertisers.

One glass case showcases a dapper white suit similar to the one he wore in an American Express ad featuring Shoemaker and Wilt Chamberlain. At 4-foot-11, Shoemaker barely reached the waist of the basketball great.

Shoemaker’s stature as a pitchman showed that his broad appeal extended beyond racetracks, a point Derby Museum curator Chris Goodlett hopes to convey in the exhibit.

“ I hope people really get a sense of how important he was by also seeing that celebrity,” he said.

Another objective, he said, is to offer some insights into the physical demands of being a jockey — “how amazing they are athletically as small persons controlling a large animal.”

Shoemaker was at the top of his trade for decades. He had 26 mounts in the Kentucky Derby, and won the first leg of the Triple Crown in 1955, 1959, 1965 and finally in 1986, which his daughter said was a special achievement.

“I think the fact that he was able to win it in the twilight of his career, and share the victory with his longtime friend (and trainer) Charlie Whittingham, made it particularly special,” Teal said. Teal remembers watching the 1986 race as a 6-year-old in her living room, jumping up and down and screaming. She still remembers the race in detail as her father navigated a ride considered one of the greatest ever.

“When he anticipated that hole opening, dropped in toward the rail and took the lead down the stretch, (it) was one of the most exciting moments of my life,” she said.

The exhibit includes video footage from each of his Derby wins. It also shows one of his most agonizing losses.

Visitors can see video of the 1957 Derby, when Shoemaker misjudged the finish line and stood up at the 16th pole while aboard Gallant Man. He sat back down immediately but Iron Liege won by a nose.

Shoemaker rode much of his career on Southern California’s competitive circuit. He was the first jockey to reach $100 million in career earnings. After retiring as a jockey, he worked as a trainer from 1990-97.

The exhibit, which runs through this Dec. 31, is on the second floor of the museum, where every day seems like Derby Day. Visitors relive past races through videos and memorabilia that also capture the pageantry. The museum also arranges for guided walking tours of Churchill Downs.

Teal, who lives in San Francisco, plans to visit the museum with her husband. She’ll see scrapbooks chronicling some of her father’s big victories. Other pages show a more personal side. There’s a party invitation signed by friends after his 1986 Derby triumph. Another scrapbook page features a button from Teal that says: “My Heart Belongs to Daddy.”

Goodlett said the scrapbooks are meant to give people a glimpse into what Shoemaker was like “as a man, not just as an athlete.”