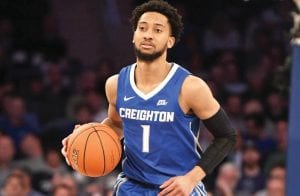 She might be more than just a little bit biased, but Keely Willis says the perception of her husband, former Kentucky basketball player Derek Willis, took a dramatic shift during his second professional season in Germany.

“He went from not being known to being talked about by every team there in six months,” Keely Willis said. “The NBA remains his end goal but we are grateful he has been able to play with and against a lot of high talent in Europe.”

After a year in the G-League when he was not drafted by any NBA teams, Willis went to Germany. He played in 34 games during the 2018-19 season and averaged 12 points and five rebounds per game before signing a two-year deal after the season ended.

His second season was suspended by the COVID-19 outbreak and the player and his wife were able to barely get back to the United States before a travel embargo was put in place. However, Willis said he “definitely enjoyed” playing in Europe.

He said he had “great teammates” and a solid team.

“I was the No. 1 ranked 3-point shooter and had the highest shooting percentage in the Europe Cup,” he said. “I thought I played well. I was ranked in rebounding, blocked shots and other categories in the league. So I think I had a pretty good year.”

His plan has been to increase his level of league play each year — and so far he has. He’s moved from the G-League to the International League. Next would be the Euro League or the NBA.

“I want to play Euro League and then try to make the NBA again,” Willis said. “That’s the logical path and plan. When I watch the Euro League, to me the players play harder and are more physical than the NBA. It’s a very overlooked league and not respected in America like it should be.

“You are playing against some guys and teams I have huge respect for and what they do is completely different. Top level European play is pretty competitive and sometimes I feel like it is tougher to play and succeed in that league than it is in the NBA.”

One plus last season was former UK teammate Isaiah Briscoe was on Willis’s team for a few months.

“It was good to catch up with him and see how he has grown as a person and player,” Willis said.

Another former UK player, Archie Goodwin, was also Willis’s teammate and his former UK teammate, Dominique Hawkins, played in a different league but lived only about 17 miles away from Willis and his wife.

Keely Willis volunteered to coach a basketball team for players with special needs and often convinced her husband to help her.

“After he would get done with his practice, our team would practice and sometimes Derek would run around with the guys and play basketball,” Keely said. “If he was not there, I would play.”

The couple spent time trying to learn the German language, a necessity for Keely to get an office job. She says the players’ wives and girlfriends were all “close” and she also picked up a new hobby — photography.

“I really want to try and make a career out of photography to make the most of the situation I am in since I can’t do what most of my friends back in the States do job-wise,” she said.

“Fortunately, I got to travel a lot, too. We are 40 minutes from Switzerland, 45 minutes from Austria, four hours from Italy and a couple of hours from France. We are near everything. So I had a lot to keep me busy, including figuring things out for Derek’s nutrition. But I really did love being there and would not mind going back at all.”.

Kentucky’s backcourt for next year needed experience and depth and got both with Creighton transfer Davion Mintz who said getting a chance to play at Kentucky was a “blessing” because he wanted to play where the team had a chance to win at the highest level.

“I wanted to be able to show my skill set but also win games,” Mintz said. “I can do that at Kentucky and hope my playing experience will help.”

He averages 9.7 points, 3.0 rebounds and 3.0 assists per game during the 2018-19 season before red-shirting last year due to a preseason ankle injury. He’s a solid free throw shooter — 72 percent at Creighton — and 35 percent shooter from 3-point range.

He’s also started 79 games, which could be a huge asset on a team that will be dominated by true freshmen next season.

“He could be perfect for what Kentucky needs,” one college coach told me. “He’s not a big-name guy. He’s used to playing a role and sharing the ball. He can play the point or play off the ball. He can guard multiple positions. He was considered a great teammate at Creighton. This might not be a flashy pick up for John Calipari but it’s a really good get for what his next team needs.”

Freshman Emma King was not surprised when Kentucky coach Matthew Mitchell didn’t waste any time making it clear he was not interested in the coaching vacancy at Mississippi State, his alma mater.

Mitchell’s success at UK made it easy to speculate that he might be interested in the job since State has become one of the elite teams not just in the SEC but in the nation.

“He has talked to us all about how much he loves Kentucky,” King said. “He makes it very clear where his heart is. He proves every day he likes it here.

“He says all the time he would not rather have any other group. He loves going to battle with us. I did not think he was going anywhere even before he said it. He is a man of his word. His family enjoys it here with him and we love playing for him. So no, I never thought about him even leaving.”

She was also not surprised that her coach reacted the way he did when sophomore Rhyne Howard did not receive All-American honors from the Women’s Basketball Coaches Association. She was SEC Player of the Year and two other SEC players were named All-American in voting by coaches.

“That to me … I don’t agree with that. Rhyne has proven she is the top in the country if not the best. She proves that every game. It just does not really make sense she was left off,” King said.

King does know how Howard will react to that omission.

“She will use this to fuel that fire and that should be pretty scary to teams playing us next year,” King said.

If Kentucky coach John Calipari is right, pregame and postgame handshakes likely are a thing of the past in college athletics.

During a recent BBN Live he suggested players and coaches wave or just say something to each other rather than the traditional postgame handshake. Same before games.

“In the NCAA Tournament, the national anthem, play it right before tipoff. Not 12 minutes where we go out and shake hands and touch and talk and spit and cough. Right before tipoff,” Calipari said.

“The game ends, you point. ‘See you after.’ Call the guy on the phone. These kids stay in touch anyway. You don’t need to do it. That’s just one thing that should change and probably will change.”

Calipari, though, is not one who believes everything needs to change. He doesn’t want to think about a time with only online classes for students.

“Don’t tell me you can do everything online. These young people need the interaction. They need to be with other students learning as much socially and the interaction and in the company of experts and mentors and professors. So don’t tell me all of it will be online.” the UK coach said.

Quote of the Week: “If you want to bring joy when everything is miserable, do something for someone else. There are always things you can do for others,” Kentucky coach John Calipari on how to cope with the COVID-19 outbreak.