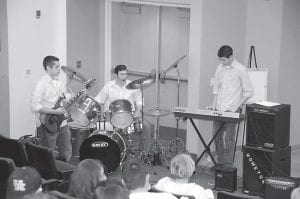 A new musical group, The Desperados, worked as the house band and feature performers for ‘She-Haw,’ an annual production by Madeline Gibson’s Appalachian Studies class at the Whitesburg Campus of Southeast Kentucky Community and Technical College. The group performed a wide range of music from Roy Orbison’s “Pretty Woman” to Tim McGraw’s “Indian Outlaw”before a crowd of more than 80. Pictured left to right are band members Tanner Warf on guitar, J. Paul Wright on lead vocals and drums, and Jordan Staton on keyboards. Not pictured are band members Nathan “Jumbo” Sturgill on bass and his brother Steven Sturgill on vocals and acoustic guitar. “She-Haw” is produced in the tradition of the “Hee-Haw” televison program to highlight the role of women in the Appalachian culture and honor them for their service to the area’s customs and way of life.