But companies say Appalachian coal is too expensive to mine 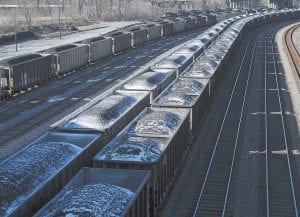 Coal cars from the mountains were dusted with snow as they sat along the track in Roanoke, Va., last week. Coal remains the biggest source of fuel for generating electricity in the U.S. and coal exports are growing fast. Even as coal production plunges in Appalachia, it is booming in the open-pit mines of Wyoming and under the plains of Illinois and Indiana. (AP Photo/The Roanoke Times)

In a series of reports entitled “The Future of Coal,” The Wall Street Journal has been taking an in-depth look at the nation’s coal industry, its current failures and current successes, and where the industry is headed over the next three decades.

Last year was a tough one for the coal industry.

James River Coal Co. laid off a quarter of its workers (including many in Letcher County). Consol Energy Inc., which has mined coal since the Civil War, sold five Appalachian mines, representing nearly half its coal output. And more than a half-dozen U.S. coalmining companies went under, beset by new environmental rules and competition from low-cost natural gas.

But coal isn’t going away.

Coal remains the biggest source of fuel for generating electricity in the U.S. and coal exports are growing fast. Even as coal production plunges in Appalachia, it is booming in the open-pit mines of Wyoming and under the plains of Illinois and Indiana.

Overall, U.S. coal production is projected to remain relatively constant over the next three decades, according to the U.S. Energy Information Administration.

Demand is being stoked by the rise of power-hungry middle classes in emerging economies, led by China and India. By the end of this decade, coal is expected to surpass oil as the world’s dominant fuel source, according to a recent study by consultant Wood Mackenzie.

Two-thirds of coal’s growth will be driven by demand for electricity in China, the firm says. “China’s demand for coal will almost single-handedly propel the growth of coal,” William Durbin, Wood Mackenzie’s head of global markets, said in a recent speech.

Concern over the links between climate change and carbon emissions linked to coal could reduce consumption. Assuming weak economic growth and the strictest environmental rules, global coal demand could drop to 3.3 billion tons in 2035 from around five billion today, according to the International Energy Agency. But if politicians and regulators decide that the benefits of coal outweigh the environmental risks and craft looser regulations, coal demand could rise to six billion tons, the agency says.

The decline of the coal industry in the eastern U.S. has hit isolated towns in places like eastern Kentucky and West Virginia’s Mingo County, uprooting families and decimating local economies. The number of people employed in U.S. coal mining has declined to 120,699, down nearly 15% from 20 years ago, although production has increased slightly over that time.

Now the father of two is making $500 a week, about a quarter as much. He was able to afford a Christmas present only for his younger child, he says and is thinking of moving to Alabama. “Here, there’s no training, no factories, nothing. What are you supposed to do?”

Coal companies say Appa- lachian coal has become too expensive to mine. Ten years ago, Peabody Energy, the nation’s largest coal producer, decided to move west and overseas. “It all comes down to geology,” says Chief Executive Greg Boyce. “You’ve got a district [in the East] that’s been mined for 100, 120 years; conditions were difficult.”

Peabody bought mines in Australia and expanded into producing higher-grade metallurgical coal for the steel industry, which has better profit margins than the thermal coal used to generate electricity.

Mines in Wyoming’s Powder River Basin offer a healthy future for the U.S. coal industry, Mr. Boyce says. “We have the largest mine in the world there, and it has one of the lowest cost structures for a mine of its size,” he says. “The coal there travels to all corners of the world.”

Exports are the U.S. coal industry’s brightest hope. The country shipped out 114.2 million tons in 2012, more than triple the level a decade earlier. Coal-export revenue meanwhile jumped to $14.8 billion from $1.6 billion.

In 2012, the country’s biggest coal customer was Canada, which consumed 42% of U.S. exports. Now the top three customers are the Netherlands, Britain and China. European coal imports have boomed as its gas supplies taper off and it tries to wean itself from nuclear power. European environmental regulations that take effect in 2015 threaten to reduce coal demand, but power plants on the continent are installing pollution-control mechanisms that could keep their demand for U.S. coal from plunging.

The International Energy Agency recently warned that the U.S. coal industry will have a difficult time competing with Indonesia, Australia and Russia in export markets, however. Some U.S. rivals in selling coal to Asia are closer, reducing shipping fees, with lower labor and environmental costs. “The U.S. will be the high-cost marginal supplier in the Asia market,” says Laszlo Varro, head of the agency’s gas, coal and power division.

The U.S. electric-power industry remains a huge customer. During the first eight months of last year, 39% of U.S. electricity came from coal, down from 55% in 1990. Natural gas accounted for 27% through August of last year, up from 17% a decade earlier, as hydraulic fracturing technology has spurred gas production. Coal is expected to decline several percentage points over the next three decades as use of natural gas climbs, the Energy Information Administration says.

American Electric Power Co., which owns utilities in 11 states including Kentucky, generated 86% of its electricity from coal just a few years ago, making it the biggest buyer of coal in the U.S. For the first nine months of last year, coal accounted for 76%. CEO Nick Akins projects the figure will bottom out at 50% to 60% by next year.

One reason that coal won’t disappear soon is that regulators are reluctant to let utilities become too dependent on natural gas, fearing that a sudden price jump could send electricity prices soaring. Also, utilities have billions of dollars invested in plants that haven’t been paid off. It often makes sense to let plants keep running until their debts are cleared; otherwise, utility customers wind up paying for unproductive assets.

This report is reprinted from the January 7 edition of the Wall Street Journal.