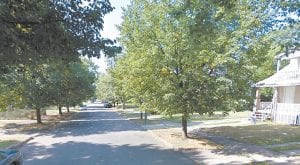 The fatal shooting of Jeremy Cornett took place on the 6900 block of Minock Street.

Authorities in Detroit are still looking for two men suspected of murdering a Letcher County man during an attempted robbery last Saturday morning.

Police say Jeremy Quintin Cornett, 37, of Jeremiah was killed about 10:20 a.m. on September 15 when he and two other Letcher County men were shot while sitting in a vehicle parked on a neighborhood street in Detroit’s west side.

Wounded in the attack were Shane Taylor and Seth Ryan Brown, who had traveled to Detroit from Letcher County with Cornett and a fourth person, a woman whose name is being withheld by investigators.

Detroit Police Officer Christine Rozier said the two injured men, one of whom she said is 38 years old and the other 27 years old, were being treated in a Detroit hospital for injuries she described as “temporary serious.”

Cornett’s body remained at the Wayne County morgue in downtown Detroit pending further investigation, a spokesperson there said late Tuesday afternoon. Because of that, funeral arrangements for Cornett probably won’t be made final until sometime next week, said Caleb Howard of Everidge Funeral Home in Whitesburg. 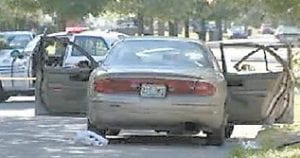 Detroit television station WDIV aired this photo of the car in which Jeremy Cornett was shot to death by two robbers.

Cornett and his two wounded friends were sitting in a Buick Sentry automobile with Kentucky license plates parked in the 6900 block of Minock Street when the two assailants tried to rob them. The woman who was traveling with Cornett, Taylor and Brown was inside a nearby house when the shots were fired.

“The suspects fired shots into the vehicle and fled,” said Officer Rozier.

Detroit television station WDIV “Local 4” reported that the windows of the car, which is apparently owned by the unidentified woman, were shattered by gunfire.