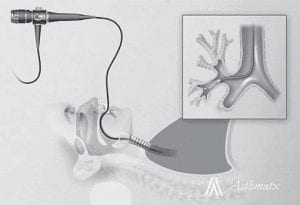 This illustration from Asthmatx shows how bronchial thermoplasty works using the Alair system.

People with severe asthma are getting a radically diff erent treatment option: A way to snake a wire inside their lungs and melt off some of the tissue that squeezes their airways shut.

Bronchial thermoplasty isn’t for everyone, just a subset who wheeze despite today’s best medications. It is neither a cure nor without risk. But the Alair system, rolling out this month, offers the first method of physically altering spasm-prone airways.

“It does seem to improve your ability to live with your asthma,” says Dr. Michael Silver of Chicago’s Rush University Medical Center, who is not involved with Alair’s manufacturer but has monitored its development. “I certainly have moved from skeptical to, ‘it has a niche.’”

“It’s a very novel, very innovative treatment,” but only for the right patient, agrees Dr. William Calhoun of the University of Texas Medical Branch at Galveston, a spokesman for the American Academy of Allergy, Asthma & Immunology.

About 22 million Americans have asthma, and a variety of medications off er good control for many. Still, asthma kills about 4,000 people a year in the United States and hospitalizes at least half a million. Up to 15 percent of patients have severe disease, experiencing frequent attacks despite daily medication; too often they still need emergencyroom care to end the gasping.

“It’s like slow suffocation,” says John Rapp, 59, of Arlington, Virginia, who wound up in the ER four or five times a year before participating in a study of bronchial thermoplasty.

California-based Asthmatx Inc. estimates its Alair system, which the Food and Drug Administration approved last week, could target up to 2 million adults like Rapp.

Asthma is a two-pronged disease. First, inflammation inside the lung’s branchlike airways narrows those channels to make breathing difficult. The airways also contain a layer of muscle tissue that spasms when something irritates the lungs. That so-called smooth muscle can double in thickness with repeated attacks, making airways increasingly twitchy.

Bronchial thermoplasty beams radiofrequency waves to heat up and shrink that muscle layer so that airways cannot constrict as badly during an asthma attack.

In a half-hour outpatient procedure, doctors thread a flexible tube called a bronchoscope through the nose or throat and down into the airways. An electrode at the tip beams those RF waves through the airway wall to reach the muscle underneath without causing a burn.

A company-funded study tested 288 adults at 30 medical centers. About two-thirds received bronchial thermoplasty. The rest got a sham treatment, a bronchoscope that reached into their airways but did not fire — to be sure that if people felt better, it was due to the thermoplasty and not a placebo effect. Indeed, sham-treated patients reported feeling better. Both groups stayed on their daily medications.

It takes three treatments a few weeks apart to reach diff erent parts of the lungs. But a year later, thermoplasty treated patients reported better improvements in quality of life, fewer severe asthma attacks — 26 percent of thermplasty patients had one compared to 40 percent of the sham patients — and, importantly, a major drop in ER visits.

The drawback: Thermoplasty irritates airways, meaning risks right after treatment that include temporarily worse asthma, a partially collapsed lung and coughing up blood. Some 8.4 percent of thermoplasty patients required hospitalization, mostly on the day of treatment, compared with 2 percent of the sham group.

“If you’re willing to take that short-term risk, the longterm benefits are substantial in quality-of-life,” concludes Dr. Mario Castro of Washington University in St. Louis, Missouri, who led the study. “We’ve maximized everything we currently have available for these patients … and they’re still not controlled.”

The big caution, says Rush’s Silver: What are the long-term effects? RF is used safely in other health conditions, and animal studies and some patients tracked for several years do not suggest problems. But Silver asks if scarring might show up years later and how long thermoplasty’s benefits last. The FDA is requiring Asthmatx to conduct a fiveyear study to find out.

Thermoplasty is not for patients currently experiencing worsening asthma or who have an infection or a bleeding disorder, FDA warns.

And candidates must have realistic expectations, adds Texas’ Calhoun. Thermoplasty does not reach smaller airways or treat asthma’s inflammatory side.

Typical bronchoscopes range from $2,000 to $4,000, he says, and it is not how much an Alair-aided one will cost. Asthmatx says the disposable catheter for each procedure costs $1,500; doctors also will need the wire-heating machine, which costs about $30,000, similar to other radiofrequency generators.

Back in Virginia, Rapp has not made an ER visit in the three years since his thermoplasty, and says the shortness of breath he experienced from a partially collapsed lung after one trial treatment cleared up quickly.

“I can run around like a wild idiot, have fun with the dog, with my daughter,” he says. “I’m always going to have asthma symptoms, but this greatly reduces them.”

for The Associated Press
in Washington.