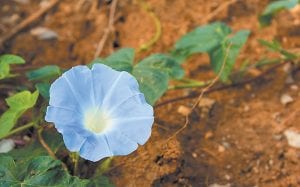 A morning glory starts spreading across a garden in this photo. Morning glories are among the most troublesome weeds to bring under control in Kentucky and elsewhere in the United States.

Back in the 1980s we had a retired neighbor who decided she was going to get the wild morning glories out of her garden once and for all.

I’ll call her “Nancy” in this column, even though that was not her real name. She never wanted her name in the paper back then and, even though she went over to the other side nearly 20 years ago, I’m not going to dishonor it now.

Nancy, like most gardeners in our neck of the woods, spent the bulk of her gardening time chopping or pulling purple pigweed, lamb’s quarter, crab grass, wild lettuce and wild morning glories out of the various veggies she liked to grow.

As most gardeners know, morning glories are far more difficult to combat than all other weeds combined, and if you raise a garden larger than a hundred square feet or so, you soon discover that it is impossible to kill all of them unless you stay at it from mid-March until December.

Nancy’s plan was pretty simple. She grew some “patio” cucumbers (“awful tasting things”) and several tomato plants (‘better than no tomatoes at all”) in containers scattered around her back yard and simply bought the stuff she normally grew from her neighbors. For instance, I tried to give her a five-gallon bucket of beets to pickle but she would not take them unless I was willing accept $5.00 in payment.

I would catch her gone and leave beans, sweet corn, cabbage, real cucumbers, green onions, lettuce, new potatoes and stuff like that on her front porch but more than once I found unaddressed envelopes with money in them lying on the seat of my truck.

In the meantime, Nancy hired a fellow to mow and spray weed killer all around the perimeter of her garden. She also hired him to till it once a week or she did it herself. It was not unusual to see Nancy out in the last hour of daylight chopping morning glory sprouts and crab grass out of a 1,000 square feet “garden” that had absolutely nothing else growing in it. She kept it as clean as a clay tennis court and that’s the way it looked when planting time rolled around in the spring of 1986 or 87, I forget exactly which.

Anyway, the year after she had made sure that not a single morning glory, nor for that matter any other weed had gone to seed in or within 20 feet or so of her garden the previous year, Nancy plowed, tilled and set about planting her garden. One day around the first of June she waved and motioned for me to stop as I drove by.

“I want you to come and take a look at my garden,” she hollered from her front porch.

I figured she was going to brag on her sweet corn, because it was at least two weeks ahead of mine or that maybe she was going to offer me a mess of lettuce, radishes and green onions, all of which were also way ahead of minr, but the scowl on her face told me that generosity was the farthest thing from her mind.

“I want you to come out here and look at this and tell me what’s going on,” she said as we walked out to her garden.

The reason for Nancy’s dismay was conspicuous as soon as we got to the edge of the garden. Thousands upon thousands of morning glories in the two-leaf, just-sprouted stage were all over the garden.

“There was not a weed in here when I finished hoeing just three days ago,” she muttered, “and you know as well as I do that I didn’t let a one go to seed last year. The seeds are too heavy for the wind to blow them very far, so how on earth did these morning glories get here?”

I told her that maybe it was an act of God.

“Act of God, my foot!” Nancy exclaimed. “If wild morning glories are an act of anything it’s the devil that’s behind it.”