If Devin Booker is not the best former University of Kentucky player in the NBA right now, he certainly has to be close. And he put himself in elite company with his game one performance in the Western Conference Finals when he had 40 points, 13 rebounds, and 11 assists — his first-ever triple-double — in a 120-114 win over the Los Angeles Clippers.

Only NBA superstars LeBron James, Larry Bird, and Bill Russell have ever led a team in points, rebounds, and assists in a conference/ division finals game before Booker did it.

Booker has never been one to brag on his play and took the same humble attitude when asked where that game ranked among the big moments in his career.

“That’s for everybody else to rank performances and such. I’m just out there trying to do my job and that’s to win basketball games at all costs,” Booker said.

Booker said his “old-school game” comes from growing up in Grand Rapids, Mich., and then moving to Moss Point, Miss. He said that made him figure out two different cultures and why people act the way they do. 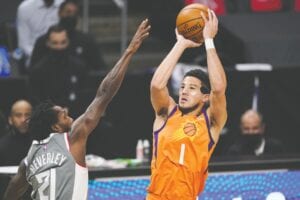 He’s also that rare player who can still score effectively with a mid-range shot.

“That’s pretty much been my game my whole life. I never shied away from it and I never have not took those shots,” he said. “I feel that’s what a lot of defenses give up, living by the so-called analytics. But if you put your work in and you shoot those shots at a high clip, that’s tough for a defense to guard because that’s what they have been giving up all season.

Booker has needed his entire offensive package in the Western Conference Finals. In the first four games of the series, Booker was only 5-for-22 from 3-point range but still managed to score 100 points (he was 29 of 31 at the foul line). s

He wandered around the Somerset High School football field interacting with youngsters in various ways and smiling and laughing almost constantly.

Former University of Kentucky football star Lynn Bowden felt right at home in Somerset, the reason he came back for a second straight year to do a camp for the Somerset Youth Football League.

“It means a lot for me to be here. I wish I had opportunities like this as a young kid,” Bowden said. “I know them seeing me out here … I was once them. It just means everything to me.

“I wanted to bring my son but I had a couple of things I had to do before and I knew he was going to be running me crazy. So next time when I come back, I will bring him.”

Come back? Kerri Brooks said Bowden, who now plays for the Miami Dolphins, told league officials he “was up” for making it a yearly camp.

“I think he just sees himself in some of the kids and truly enjoys giving back. I was amazed at his personality when I met him last year. He far exceeded our expectations,” Brooks said.

This was Bowden’s only camp this summer — “I am focusing on bettering myself this offseason,” Bowden said — even though he hopes to have one also next summer in Youngstown, Ohio, his hometown.

“I was here last year and feel like I am home here just like I feel at home in Lexington,” Bowden said. “It is fun. It means a lot to me. I was once one of those young guys that didn’t have nothing coming up. Just being able to do this now that I got stuff means a lot to me.”

Bowden was even in Somerset the day before the camp to support a COVID vaccination clinic. He is fully vaccinated and wanted to encourage others to do the same.

He was just as encouraging with the campers as he was in constant motion finding a way to work with or talk to as many of the 115 campers — and camp volunteers — as he could. It might have been running a drill, taking part in a 7-on-7 game or seeing if he could throw a ball into a target. He did it all and that’s why he’s ready for his young son to get going.

“I started about his age. It’s about time for him to get out and get after it like I did,” Bowden said.

Bowden was a four-star recruit out of Youngstown, Ohio, who had offers from Michigan State, Michigan, Nebraska, Wisconsin, and even Ohio State. He was the sixth-leading rusher in Ohio high school history with 7,387 yards and 10th with 91 rushing touchdowns. He was also an all-state basketball player who averaged 24 points, six rebounds, and seven assists per game his senior season.

At Kentucky he had 67 catches for 745 yards and five scores his sophomore season, returned two punts for touchdowns, and ran back 27 kickoffs for 539 yards when UK went 10-3. However, he created his legacy his junior season when he moved to quarterback after four games. He had a SEC record 284 rushing yards and four touchdowns against Louisville and finished the regular season with 1,235 rushing yards and 11 scores. He also had 330 yards passing, 200 kickoff return yards and 30 receptions for 584 yards.

He threw the game-winning touchdown pass to Josh Ali in the Belk Bowl to end UK’s season and his collegiate career. Bowden also won the 2019 Paul Hornung Award given to the nation’s most versatile player.

He’s proud he joined players like Josh Allen, Benny Snell, Lonnie Johnson, Jamin Davis, and others to change the direction of the UK football program.

“Now recruits look at Kentucky like it is a top school where they can go and succeed because they see other guys who have succeeded,” Bowden said. “I spent a couple of hours with the coaches and team before I came here. They are hard-working young men. They have a lot of potential and I know they are going to succeed this year.

Bowden was the 80th overall pick in the 2020 NFL draft by the Las Vegas Raiders in the third round only to be traded to Miami just a few weeks into the season. He got his first extended playing time late in the season and had four catches for 41 yards against Cincinnati before making seven catches for 82 yards the next week against Kansas City.

Bowden would not share thoughts on his expectations for his second NFL season.

“I kind of got in trouble for talking about it, so I will just let it play out and see what happens,” Bowden said.

But he talked plenty to the campers. It was almost non-stop chatter from a player who did not always say a lot during his UK career. He said the camp let him show his personality.

“Just shows me outside of my shell. I have spent most of my life in my shell. I like to be out and about, so I am here,” Bowden said.

So talking to youngsters in kindergarten through sixth grade was more fun than an interview with 20 or more media members?

“That is like being interrogated. This was fun,” Bowden said. s

Losing two players who both have 10 Power 5 scholarship offers would be a blow to any high school football program but Somerset coach Robbie Lucas wishes nothing but the best for twin brothers Jacob and Jerod Smith as they head off to Loomis Chaffee School in Connecticut.

“They both have the body of a man,” Lucas said. “They are young kids who have a world of potential. Athletically, get them in front of you and you can tell they can move. They have a great combination of skill and size. Coaches see their size and athleticism and love it. They played two years for us but are going to redo the sophomore year, so coaches love what lies ahead for them.”

Lucas thinks if they do stay in high school three more years they will “present problems” for a lot of teams. Jacob Smith is a 6-4 1/2, 227-pound defensive end/ tight end. His brother, Jerod, is a 6-3, 250-pound linebacker defensive end-running back.

Both have been early morning weight room regulars for workouts with Somerset assistant coach Kevin Sheron, the father of UK freshman quarterback Kiaya Sheron and their former high school teammate.

“They very rarely missed a workout,” Jeff Sheron said. “They really get after it in the weight room and the extra year in high school will be really beneficial to them because they both know they have a lot of work still to do.”

Lucas said as much as he would like to have had them continue playing for him, he has no ill feelings about the move to the private school.

“We will miss them. They are really good kids but they have just decided to go a different way,” the Somerset coach said. “They are kids that can flat play. We wish them well. They will always be mine and Somerset players.”

“BBN Tonight” on WLEX-TV in Lexington is now almost a year on and the 30-minute weeknight show provides exclusive access to University of Kentucky coaches and players not available anywhere else through WLEX’s partnership deal with UK.

Even having to deal with the pandemic has not stopped the content flow.

“It was kind of an odd thing to start out with masks and Zoom interviews when we started, but we made it work,” WLEX-TV sports director/anchor Keith Farmer said. “Some coaches at UK did not know us very well when we started back in August. It was great to sit down with them in whatever way we could to get to know them and let viewers get to know them.”

The show airs Monday through Friday from 7:30-8 p. m. EST and Farmer says things “took off” with spring football for BBN Tonight.

“Things started to open up more and we got some extra access. They wanted to promote what was going on with football and they allowed us to come in while they were just doing Zoom with most of the media,” Farmer said. “We sat down with (UK coach Mark) Stoops weekly and got to talk to players one on one. We feel like we are getting people BBN wants to hear from and are providing a platform for them to be heard.

“I have been excited about getting to do sports other than basketball and football. Volleyball had a great run and we let people get to know the players and actually hear and see a full interview with them. I liked letting people know about softball, golf, tennis, and more.”

“Anna has done great. I knew of her a little bit from Twitter interactions. She’s from Louisville but has such a passion for UK sports,” Farmer said. “She knows sports, too. She has been able to pick up and talk about all the different sports because she has followed UK since she was little.

“Maggie was a find and a steal. She is going to be a rock star and I hope she is with us for a long time. She is one of two producers (Jesse Riffe is the other one) for the show. Her writing is awesome and she has some great connections.” s

Quote of the Week: “It was good, we had a nice conversation and I love Kentucky especially with family ties and things like that. In general, I really just love college basketball so any coach I talk to is exciting. I’m a college basketball fan and I love watching March Madness,” DJ Wagner, the top-rated player in the 2023 basketball recruiting class, to 247Sports on his relationship with John Calipari.