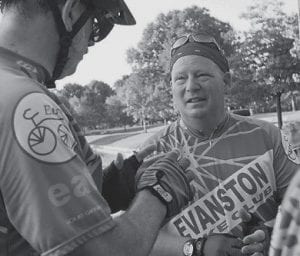 David Barish, right, a 49-year-old Chicago attorney with diabetes and heart disease, talked with a members of his cycling club before a 50 mile ride recently in Evanston, Ill. Barish’s doctors switched him from Avandia to Actos which he says is good news in light of a new analysis that shows the blockbuster Actos diabetes pill appears to lower risks of death, heart attacks or strokes, unlike its beleaguered chief rival Avandia. (AP Photo/ Stacie Freudenberg)

However, the Japanese-made Actos also carries an increased risk of nonfatal heart failure, the analysis showed, confirming earlier studies. Heart failure is also a side effect with Avandia. Such problems led one diabetes expert to recommend that both drugs be considered second choices behind older, cheaper pills.

Heart failure “is a significant side effect,” said Dr. Alvin Powers, director of Vanderbilt University’s diabetes center. “No one would say that you should be on these drugs to prolong your life.” He was not involved in the research.

The findings are important because heart attacks are a leading cause of death in diabetics, the authors said.

Older drugs including Metformin are available in generic form and can cost less than 20 cents a day – 10 times less than Avandia and Actos. However, the older drugs can stop working, and doctors may try newer pills instead of having patients resort to insulin injections.

When the older drugs lose effectiveness, Actos “is a drug that clearly I think is preferable,” said Dr. A. Michael Lincoff, who coauthored the Actos study with Cleveland Clinic colleague, Dr. Steven Nissen.

Their research was paid for with a $25,000 grant from Takeda Global Research & Development, a U.S. division of Actos’ maker, Takeda Pharmaceutical Co. of Osaka, Japan. Takeda had no role in designing their analysis.

The review, appearing in the Journal of the American Medical Association, is the biggest to date on Actos. It pools results of 19 rigorous studies involving more than 16,000 people. Compared with patients taking other diabetes drugs or none, Actos patients had an 18 percent reduced risk of death, heart attack or stroke.

The same researchers wrote an analysis earlier this year linking Avandia with increased heart attack risks, and a drug advisory panel is recommending stronger warnings on that drug’s packaging. The U.S. Food and Drug Administration has not acted on that recommendation.

The agency is requiring label warnings of the heart failure risks for both Avandia and Actos.

A separate analysis of four Avandia studies in the same journal found heart attack and heart failure risks similar to earlier reports. Dr. Curt Furberg, a co-author of that analysis, reported that he heads a government heart disease study that received a 2004 grant from GlaxoSmithKline PLC.

GlaxoSmithKline PLC, Avandia’s maker, said the new report does not prove Actos is safer than Avandia. The company added that the Avandia review amounts to selective analysis of old data.

An editorial in the medical journal said the new information underscores the need for quicker regulatory action when signs of trouble with new drugs surface.

Actos and Avandia each have been used by more than 7 million patients since they were introduced in 1999. They belong to a troubled newer class of diabetes treatments.