Diallo was ready for UK, but not NBA 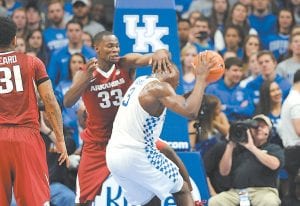 Kentucky’s Bam Adebayo doesn’t mind physical play like he faced against Arkansas and made a fan of coach Jack Doss in the McDonald’s All-American Game. (Photo by Vicky Graff )

Having Hamidou Diallo decide to start his college basketball career now was no surprise to Marc Allard, sports editor of the Norwich Bulletin in Connecticut.

Diallo, a 6-5 guard, announced Saturday that he would start classes at Kentucky this week. He had graduated from Putnam Science Academy in Connecticut last year and had been playing there as a graduate student this season.

“Diallo is beyond the Putnam Science Academy level and, mentally, past it. I don’t think several more months in Putnam would have benefited him, or quite frankly, the team,” said Allard. “He has to go and test himself on the next level.”

Diallo could be eligible for the NBA Draft in June. Speculation has been that he will practice at UK this season, not play, and then be ready for a full freshman season. But some have also wondered if he might use the next few months at UK as a way to train for the draft.

“He’s not ready for the NBA … right now. His stock, from what I’ve been hearing, has been dropping in that regard because of his performance. I don’t think there is a question that he will remain at Kentucky for a year and a half … after that is a crapshoot and will depend on his development,” Allard said.

Going into the season Allard had praised Diallo’s passing and defensive play as much as his ability to score.

“PSA designed many of their plays for him this year so he was, not necessarily by his own plan, but by design, a little more centered on himself rather than the team,” Allard said. “Also, with all of the recruitment talk, the visits including many by NBA folks, he sort of lost his game a bit. That could have also been a by-product of the boredom. He was ready to move on.”

Many thought originally he might move on to Syracuse or Connecticut, two schools that are close to his New York home and also recruited him much longer than UK. Allard said it was not hard to understand what gave UK the edge.

“He needs to improve his NBA stock. (John) Calipari, obviously, has a habit of producing top NBA picks in one year and I think that is Diallo’s game plan,” Allard said. “Also, Kentucky has much more visibility than UConn right now, plays a higher caliber schedule and may get Diallo’s juices flowing again.”

During his press conference to announce his choice, Diallo basically said the same thing about the NBA.

“They just had the right plan for me going forward, for getting me to the next level,” Diallo said.

He will have at least five other high caliber players in his recruiting class, including four other five-star recruits. They all reached out to him via Twitter as soon as he announced. One, Philadelphia point guard Quade Green, had all but guaranteed he would get Diallo to Kentucky after he signed with UK.

Diallo will also get to go against Malik Monk, De’Aaron Fox, Isaiah Briscoe and others in practice daily the next four months.

“I think he is one who is motivated by a challenge. The kid is good. He needs to improve in some areas, but when he came to PSA he was hardly the player he is now. That additional motivation should actually be a help, not a hindrance,” Allard said.

Diallo is ranked as the nation’s top shooting guard in the 2017 class by some recruiting analysts. However, that’s because of his ability to score. He’s not a prolific 3-point shooter. “He is a really nice, open-floor player. Get him out on the break and in transition, he’s nearly unstoppable. Jump shots and perimeter stuff, it’s an adventure,” Allard said. “It’s one of the biggest reasons why Diallo is going college, rather than pro.”

Recruiting can involve hours of work. Ask any college coach. But sometimes getting lucky is just as important.

Eastern Kentucky sophomore Nick Mayo is a potential NBA player that many basketball fans in Kentucky probably do not know nearly enough about. He’s from Maine and has rare shooting and passing skills for a big man.

Dunbar coach Scott Chalk deserves an assist for him being at Eastern Kentucky. Chalk was working a basketball event for Eddie Ford in Louisville when he saw Mayo play.

“I thought he was really special. He was doing some things in AAU that big guys don’t usually do,” Chalk said.

At that time, Austin Newton was an assistant of Jeff Neubauer. He was at the same event looking for players and always made a point to see Chalk and ask if he had seen any players who impressed him

“Austin was one of the guys that would come by and ask me stuff and I told him this was a kid you need to watch. I sent him over there … and they did the hard work after that. I did put them on him,” Chalk said.

Newton was so excited that he got Neubauer to come see Mayo the next day. A scholarship offer followed and after that the Eastern coaches just hoped no one else would notice.

“He is special. He could have gone to a lot of places, but a lot of people did not know about him. That happens. He is a special talent. He will make some money playing one day,” Chalk said. “Every time Austin sees me, he thanks me still.”

So does current Eastern coach Dan McHale, who was fortunate to have Mayo waiting for him in his first year. Mayo was named Ohio Valley Conference Freshman of the Year for the 2015-16 season and leads the Colonels in scoring this year.

Newton is now an athletics fundraiser for Eastern and seldom misses a chance to watch Mayo play.

How good is Bam Adebayo? Well, veteran Alabama high school coach Jack Doss still believes his team would have won the Mc- Donald’s All-American Game if he had been able to play Adebayo the minutes he wanted.

“Well there’s no question about it. Bam did not play but a few minutes. That’s the way the rotation is and it is their showcase, but if he could have played more, our team wins,” Doss said.

Doss’ current star is wing John Petty, who picked Alabama over Kentucky and likely will be in the McDonald’s All-American Game this spring.

“I still get to watch Bam a little bit this year,” Doss said. “De’Aaron Fox did not have a good game for us that night, but I knew he was special. What great young men they are and I still hope to get up to Kentucky to see them play. I talk to them every once in a while. It’s just great that we had four days together and they still care enough to get back to me.

“Let me tell you this. Those young men were disciplined and respectful. As a coach, you appreciate that because not all stars are that way.”

Forgive Wenyen Gabriel for making sure everyone knows exactly what he thinks of teammate Malik Monk.

“Malik’s great. I think he’s one of the best players I’ve ever played with in my life. Definitely is. He just does a lot of amazing things every time he’s on the floor. He’s a great player. People get on him about the Louisville game (when UK lost), but we don’t even mention that around here because he’s such a great shooter,” Gabriel said.

I talked with ESPN analyst Dick Vitale last week about Monk’s 47-point game against North Carolina. He thought it was the best single-game performance he’s seen by any college freshman.

“When you consider the quality of the competition and the national stage for that game, it was incredible,” Vitale said. “You just don’t see something like that. He’s special, but probably even more special than I realized.”

It has been 21 years since Kentucky won the 1996 national championship. However, even today Cameron Mills still remembers well who was the unsung star of that team.

“Coach Pitino tried them all that position. It just didn’t work,” Mills, a reserve on that team, said. “He only put Tony there to try and help his NBA career. Coach was always doing stuff like that to help players with their futures.

“Finally Coach relented and realized he had a point guard and he needed to play him. That’s when we did bond as a basketball team and got a lot better.”

That point guard was Anthony Epps, who was not one of the nine players off that team that went on to play in the NBA.

“Anthony did not make it to the NBA and make millions of dollars like some guys did,” Mills said. “But even today we all talk about how important he was to our team and we do not win the title without him.”

Jaylen Hoard of Wesleyan Christian (N.C.) is ranked as a top 10 junior by Scout.com. He averaged 22.4 points, 5.7 rebounds and 3.1 assists per game playing for France during last summer’s FIBA 17 under World Championship and was impressive at last weekend’s McCracken County Mustang Madness.

Hoard said he knew he needed to come to the United States to prepare for college basketball and that’s why he is at Wesleyan Christian this year.

“I knew the exposure would be better and I thought it would just be a better fit. I thought it was time to come play against the best like I am now,” Hoard said. “I want to show I can play here just like I could in France. The best players are over here, so that’s where I needed to be.”

Kentucky assistant coach Joel Justus has been to see him along with teammate Aaron Wiggins, a 6-5 junior.

Hoard says he’s happy with any scholarship offer he gets, but he wants to focus on playing well this season before starting to really consider college options next summer.

“Kentucky is a great program. I know that,” he said. “They get guys in the league each year and I know it is a great school. I like Kentucky, but I just have not really thought that far ahead. In France, it was hard to really follow a school. I would more follow certain players. I watch more games now than I did in France, but mainly I just want to work on my game.”

Hoard had 30 points on 7-for-14 shooting from the field and 15-for-19 at the foul line along with seven rebounds and two assists in his first game at McCracken and came back with 16 points, six rebounds, two assists, one block and one steal in the second game.

Remember you can reach me via e-mail at larryvau@gmail.com or on Twitter at @vaughtviews.