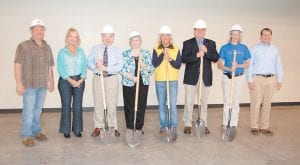 A new dialysis center being built at the industrial site in Jenkins could be finished by the end of this year.

The DaVita corporation is relocating the dialysis program from the campus of Whitesburg Appalachian Regional Healthcare (ARH) to the Gateway Industrial Park in Jenkins.

DaVita Raven Rock Dialysis will be located at the front of the industrial park in a 5,524 square-foot brick building.

“DaVita treats their patients as family and I really think they will feel at home here,” said Laura Ray, Da- Vita facility administrator.

The DaVita property includes about an acre of land. Cost of the project is more than $2 million.

Ease of access for patients and space are the primary reasons for the new building, said Scott Waggstaff, DaVita regional operations director.

The new building will have one third more space in the clinic area as well as more office space for social services and a dietician, Waggstaff said. The number of hemodialysis stations will remain at 10. 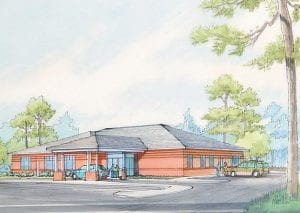 An architect’s rendering of the DaVita Raven Rock Dialysis center to be located at Jenkins on the Gateway Industrial Park.

If dialysis centers are located on a second level, Waggstaff said, unfortunate leaks could occur on levels located underneath. The dialysis center in Whitesburg is on the second floor and a rehabilitation unit is located on the first floor.

About 30 patients receive dialysis three times a week at the Whitesburg location.

DaVita, a Fortune 500 company based in Denver, Colo., prefers buildings that are ground level because of the amount of water that is used for dialysis.

Charles Watkins, OGA development coordinator, said the project was a partnership with the Appalachian Industrial Authority.

“The AIA was implemental in working with us on re-zoning efforts through the Department of Local Government,” said Watkins. “Also, we have a utility infrastructure joint venture (sanitary sewer) that will serve our building and future development in the park.”

The developer, OGA, is a national, medical real estate development and project management firm based in Nashville, Tenn. In the past 15 years, OGA has developed more than 250 medical buildings throughout 35 states.