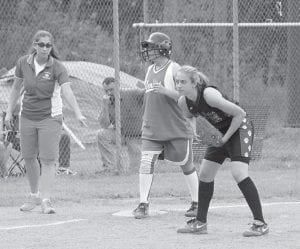 Lady Cavs come back to win, 7-2. Jenkins fell to East Ridge on May 9, but bounced back Monday to defeat Jackson City and improve their record to 23-5 on the season. 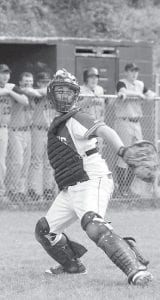 in Hazard over the weekend before falling to Cumberland on Monday. The Lady Cougars are 12-6.

Right, Jenkins catcher Nathaniel Wilder came up throwing to get an out on a bunt play in a game with Letcher Central last week.

The Cougars routed the Cavs, 15-1, and now hold a record of 17-10 after wins over Jenkins and Betsy Lane and losses to Powell County and Estill County. Jenkins won two games Saturday, beating Cordia and Menifee County, and lost to Pikeville Monday. The Cavaliers are now 6-16 on the season. (Photos by Chris Anderson)