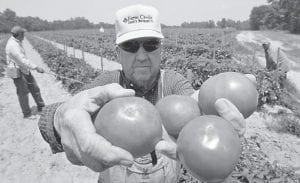 Farmer Robert Dodd displays some of his tomato crop at his farm in Hanover County, Va. As salmonella cases continue to climb, the government is checking if tainted tomatoes really are to blame for the record outbreak. (AP Photo)

As salmonella cases continue to climb, the government is checking if tainted tomatoes really are to blame for the record outbreak – or if the problem is with another ingredient, or a warehouse that is contaminating newly harvested tomatoes.

The widening outbreak – with 810 people confirmed ill – means whatever is making people sick could very well still be on the market, federal health officials warn.

However, he said it is possible that tomatoes being harvested in states considered safe could be picking up salmonella germs in packing sheds, warehouses or other facilities currently under investigation.

Most worrisome, the latest victim became sick on June 15 – long after the outbreak began on April 10 and weeks after government warnings stripped supermarkets and restaurants of many tomatoes.

“The source of contamination has been ongoing at least through early June. And we don’t have any evidence that whatever the source is, it’s been removed from the market,” said Dr. Patricia Griffin of the Centers for Disease Control and Prevention.

Disease detectives at the CDC in Atlanta are double-checking their own probes just in case some other type of produce is really the culprit.

“We have also kept an open mind about other possibilities and are looking into other ingredients,” Griffin said.

She wouldn’t identify other potential suspects, except to say that from the beginning some patients have told the CDC they ate raw tomatoes in fresh salsa and guacamole. Officials have previously cleared jarred salsas.

For now, the FDA continues to urge consumers nationwide to avoid raw red plum, red Roma or red round tomatoes unless they were grown in specific states or countries that FDA has cleared of suspicion. Check FDA’s Web site – www.fda.gov – for an updated list. Also safe are grape tomatoes, cherry tomatoes and tomatoes sold with the vine still attached.

But FDA’s Acheson made clear that consumers should stay tuned in case that advice changes.

“The facts keep changing here. The outbreak is continuing,” he said. “We need to re-examine all parts of this system and make sure that the consumer message is still solid.”

FDA inspectors tested for traces of salmonella on farms in southern and central Florida and in three Mexican states, farms suspected to have harvested at least some of the tomatoes involved in the outbreak’s earliest weeks. They also are following the path tomatoes took from those farms to packing houses and other distribution stops, testing water supplies and equipment along the way.

So far, “every single one” of 1,700 samples, mostly from farms, has been salmonella-free, a frustrated Acheson said. Hundreds of other samples are still being tested.

Salmonella bacteria live in the intestinal tracts of people and animals. Food outbreaks typically are caused by direct contamination with animal feces or use of contaminated water on foods eaten raw or not fully cooked.

Fever, diarrhea and abdominal cramps typically start eight to 48 hours after infection and can last a week. Many people recover without treatment. In fact, the CDC estimates that for every confirmed salmonella patient, there can be 30 to 40 others who didn’t see a doctor or weren’t tested – although fewer are uncounted during headlinegrabbing outbreaks.

But severe infection and death are possible. At least 95 people have been hospitalized in the current outbreak, and salmonella may have contributed to one person’s death from cancer.

The outbreak’s sheer scope – with illnesses being reported in 36 states and Washington, D.C. – and length make it unlikely that a single farm will be the culprit, Acheson acknowledged.

That in turn points more suspicion at warehouses and other points in a tomato’s path from farm to sale where bushels, even tons, may be repacked, or rewashed, or otherwise processed. Acheson said the investigation’s big surprise is how many times tomatoes are repacked, as suppliers hand-pick their way through boxes to meet individual customers’ demands for, say, small ripe tomatoes or larger greener ones.

And therein is a key problem: Some of the packing houses that handled suspect tomatoes from Florida and Mexico may now be handling freshly harvested tomatoes, Acheson said. FDA inspectors are hunting contamination in some of those packing houses now.

“Clearly the message is, we need to be looking at all possibilities,” he said. “We need to reexamine all the information.”