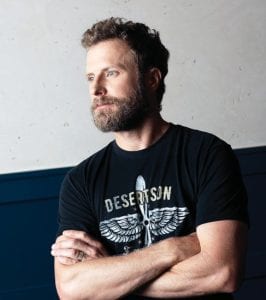 The last time Dierks Bentley made a bluegrass album, it was a chance to regroup after a terrible tour. He had opened for Kenny Chesney twice, in 2004 and 2006, and gained enough confidence thanks to a couple of platinum albums and radio hits to launch his own headlining arena tour.

In Bentley’s words: “It was a huge failure.”

“We were playing half houses, so you’re taking your stage and moving it under the Jumbotron. You put a huge drape behind you to make it look like a half house, so people are coming to the arena, but it’s only half filled and it’s kind of weird,” he recalled. “Two thousand people is a lot of people, but not in a place that holds 20,000.”

For Bentley, that setback was one of the hardest mountains he had to climb in his career. Releasing that bluegrass album, “Up on a Ridge,” in 2010 was a turning point in his career, just like his ninth studio album, “The Mountain,” out on June 8, might be for this country star.

“Being from Arizona, I had a mountain in my backyard. I would go hiking in that mountain when I was four years old,” Bentley said. “As you get older, you realize the journey itself is the reward and working your way through each step. And I feel like that’s the way my music career has been. The ups and downs, I’ve enjoyed all of it.”

Bentley’s career now seems mile- high. He’s scored four platinum singles and earned more than a dozen Grammy nominations. This year he’ll be honored by the Academy of Country Music with the Merle Haggard Spirit Award. He also won’t be hiding empty seats while on tour this year: He was one of the highest grossing country headliners last year and has announced his first ever festival, the Seven Peaks Festival, in Colorado this fall.

For “ The Mountain,” Bentley stepped away from the frenzied pace of Nashville and took several of his trusted songwriter-friends to Telluride, Colorado, a serene ski town in the Rocky Mountains that he’s visited many times when he’s attended the Telluride Bluegrass Festival.

The Arizona-born singer zeroed in on the theme of the album, which was how being in nature made him feel inspired and empowered.

“Obviously the metaphor of a mountain, climbing your own personal mountains, your battles, is where you find your strength, your character and perseverance,” Bentley said.

Bluegrass veteran Del McCoury said Bentley has ingrained himself among the close-knit community because of his humbleness and passion for roots music.

“He used to come to Station Inn and sit in with all those bluegrass pickers and he just kind of learned by example,” McCoury said. “He’s a big country star, but a lot of them got started that way, like Vince Gill and Marty Stuart and Allison Krauss.”

The album is the best representation of all his skills, from being a true fan of acoustic instruments like the mandolin and banjo, to raising a glass to his partying crowds and delivering arena-sized anthems. The first single, “Woman, Amen,” was a message song that has resonated for fans. Bentley’s tour mates, Brothers Osborne, lay down heavy guitar licks on their duet with Bentley called “Burning Man,” and the title track is a Tom Petty and the Heartbreakers-style rock song that ends with a banjoguitar breakdown.

The bluegrass influences are subtle on songs like “You Can’t Bring Me Down,” featuring mandolin player Sam Bush and heavier on the Brandi Carlile duet “Travelin’ Light,” which also features bluegrass musicians Jerry Douglas and Tim O’Brien.

“If anything I am looking for ways to take audiences higher than you can take them with just a fun song,” Bentley said. “I have ‘Drunk on a Plane.’ I have ‘5-1-5-0.’ I know I can bring the party every night. But on this record I want to find a place to take it even higher.”