Dierks Bentley revs it up for latest, ‘Feel that Fire’ 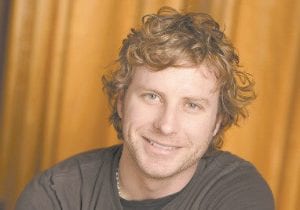 When Dierks Bentley turned over his finished album to his label after two years of hard work, he didn’t quite get the response he was looking for.

Capitol Records Nashville President Mike Dungan listened and listened, and then listened some more. Something bothered him. He thought about it and he slept on it until, finally, he had to speak up.

“He said ‘You can fire me right now if you want to, but I have to say this,”‘ Bentley recalled. “‘I feel like you talked about how you wanted to get back to a lot of fun on your record. I think you’re missing a song or two. That’s all I’m going to say.”‘

Bentley, 34, went back to work writing and recording eight more songs, two of which — the rockers “Sideways” and “Here She Comes” — ended up on his album released this month, “Feel That Fire.”

“It definitely tilted the record on the side of having a little more energy and fun than my past records, but it felt right,” Bentley said. “My goal is that on the first listen you come away thinking it’s fun and rowdy, but when you go back for subsequent listens you find” a deeper side.

Quality was never the issue, Dungan said, just balance. He thought there were too many serious songs. But he worried the young singer-songwriter might take his criticism the wrong way.

“It’s almost like saying your baby is ugly,” Dungan remarked. “Whenever you’re making a critical comment about someone’s art you don’t want to do it lightly.”

They apparently got it right, though. The album and the title track both hit No. 1 — Bentley’s sixth chart-topping single.

Bentley knew from the start that he wanted the album to be different from its predecessor, “Long Trip Alone.” Although it went gold, “Long Trip Alone” sold about half of his 2005 set, “Modern Day Drifter.” Bentley thinks he got too serious on the record.

“I thought it was going to be gigantic and it went right over the top of people’s heads,” he said. “I think that’s kind of the result of losing touch with maybe the regular country fan base and living in that bubble of the road.”

He also learned a lesson from his 2007 hit “Free and Easy (Down the Road I Go),” a simple message set to a simple tune that shot to No. 1.

“It kind of humbled me and made me remember what my job is,” Bentley explained. “If I’d been born 300 years ago I’d be a court jester and get kicked in the butt and told to put on a hat and sing songs and make people happy.”

Not to say “Feel that Fire” is all laughs. On “Beautiful World,” Bentley, the father of a 4-monthold daughter, chooses to believe there is beauty beyond the barrage of bad news. On “Pray,” a ballad he co-wrote with Rodney Crowell, he wishes peace to an ex-lover.

But more often than not the disc is more “Free and Easy (Down the Road I Go)” than “Long Trip Alone,” and Bentley is quick to credit Dungan for that.

“I respect him for saying something because that’s hard to do,” he said. “I know I can get stuck and not see the forest for the trees.”