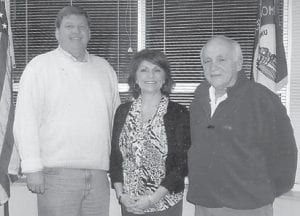 Janet Thompson of Wise, Va., has been named director of The Little Shepherd Outdoor Drama in Jenkins. Thompson’s position was funded by a gift from the Ferus Company, which is under construction in Jenkins Industrial Park. Thompson attended East Tennessee State University and the University of Virginia’s College at Wise, and is the director of drama at J.J. Kelly High School in Wise, Va. Pictured are (left to right) Letcher County Judge/Executive Jim Ward, Thompson, and Jenkins Mayor G.C. Kincer. Ward, Kincer and Letcher County Tourism Director David Narramore recently met with Thompson to discuss the drama, which will begin its 2011 production in June.