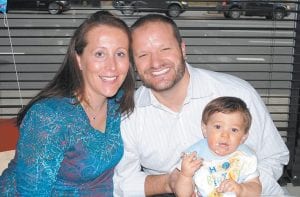 Her first pregnancy brought Dianna Fiore Radoslovich a break from the weakness and pain of her multiple sclerosis.

She put away her cane and her meds and gave birth to a healthy son.

Pregnancy No. 2 hasn’t brought the same reprieve. This time, Radoslovich juggles the cane with a toddler, a growing baby bump and a bit of anxiety.

“Every pregnancy’s different, and MS is different every day for everybody,” says Radoslovich, of New York City, who has been learning along with her obstetrician how to make adjustments.

Physical disabilities add a whole new challenge to pregnancy. And while the vast majority of women with disabling conditions appear to have healthy babies, specialists say far too little is known about moms’ risks of complications, their special needs and barriers to good care.

More than 1 million women of childbearing age have a physical disability — meaning they report needing some sort of assistance with daily living because of such conditions as MS, rheumatoid arthritis, spinal cord injuries or cerebral palsy, says a recent report in the journal Obstetrics & Gynecology. Yet when the National Institutes of Health convened experts to examine the issue, they couldn’t even find a good estimate of how many of those women give birth each year.

But it’s one that is increasing: “There will be a growing number of women with disabilities who will desire pregnancy and come to you for care,” Signore told the group.

The NIH workshop recommended a comprehensive registry to track pregnancy in women with physical disabilities and answer some key questions.

Among the priorities are following up on small studies that found preterm birth, low birth weights and C-sections may be more common among women with certain disabling conditions.

As for C-sections, many women with spinal cord injuries still are capable of a vaginal birth but may not get a chance because of nervous doctors, Signore says.

Other questions: How might pregnancy’s weight gain and fatigue affect balance and contribute to falls, in turn decreasing mobility and independence? What role do higher levels of dayto day stress play? Is postpartum depression a greater risk?

But Signore — who uses a wheelchair herself because of a spinal cord injury — challenged her fellow ob/ gyns to consider more than medical issues.

Few doctors own scales that can weigh women in a wheelchair, for example. They should have at least one exam table that lowers to the floor for women with impaired mobility, she says.

In fact, a completely routine pregnancy requires 15 visits over eight months, and just getting there can be exhausting for women with mobility problems. Signore says the challenges start at the front door, and showed photos of herself stuck outside a physician’s office, unable to heave open a heavy door even though its lever handle complied with accessibility laws.

“Accessibility is in the eye of the beholder,” she says.

The issue may be best studied so far in multiple sclerosis, perhaps because of some good news. Symptoms of MS, an autoimmune disease that can wax and wane, tend to improve temporarily during pregnancy, probably because of hormonal changes. The National Multiple Sclerosis Society notes that research has begun to test whether adding a type of estrogen to regular treatment when women aren’t pregnant might mimic some of that benefit.

Radoslovich was one of those lucky ones while pregnant with her first child, Steven Andrew, now 1.

But about 30 percent of MS patients have a flare-up of symptoms a few months after giving birth that can be severe. Breastfeeding sometimes staves off the episodes, but didn’t for Radoslovich, who had to quit when a flare-up suddenly left her unable to walk or use her right side until intravenous steroids kicked in.

The toddler is her morale booster: “When I’m having a bad day in terms of not feeling well, all I need is to see that smile on his face and him reach out to me and it’s pure medicine.”

Radoslovich was thrilled to learn she was pregnant again — a second son is due in August. But this time, the weakness, muscle stiffness and her other usual symptoms didn’t abate. She’s learned to ask for help on tough days.

Still, her doctor says she can try a vaginal birth despite having a C-section the last time that was unrelated to MS. Radoslovich hopes she’ll have the energy to make that happen.

She craves hearing how other women with MS handle pregnancy’s hurdles: “I feel like, if you can do it, so can I.”