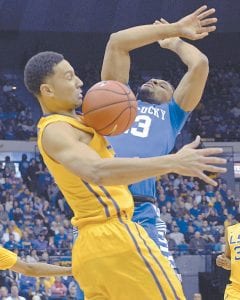 LSU forward Ben Simmons, left, and Kentucky guard Isaiah Briscoe (13) battled for control of a rebound in the first half of Kentucky’s loss in Baton Rouge, Louisiana on Tuesday. (AP Photo)

The past week was a disappointing one for the Letcher County Central High School Lady Cougars, who lost three games in the 1st Trust Bank Holiday Classic in Hazard and then lost at home January 2 to 53rd District rival Knott Central. The four-game losing streak drops the Lady Cougars’ record to 3-9.

This week, the Lady Cougars are on the road. They visited June Buchanan School Tuesday night and will play at Cordia tonight (Wednesday) before ending the week at Jenkins on Friday night.

Poor shooting and numerous turnovers continued to plague the Lady Cougars as they lost 51-32 at home January 2 in a rematch with the Knott Central Lady Patriots within the past week.

Knott Central was not much better, making 7/25 field goal attempts for 28 percent and committing eight turnovers.

LCC, behind the play of junior Paige Caudill and Destiny Hall, continued to fight through poor shooting and turnovers and kept hanging around — trailing 35-23 after three quarters.

KCC, now 9-5, was led in scoring by 15 points from Hannah Hollifield and 13 points from Jada Higgins.

The Knott Central Lady Patriots defeated Letcher Central 71-52 December 30 in the final round of the 1st Trust Bank Holiday Classic in Hazard.

LCC trailed 16-10 after the first quarter but closed to within 32-26 at the half behind the offense of junior Shelby Hall. LCC trailed just 51-39 entering the final quarter before the Lady Patriots pulled away.

The East Ridge Lady Warriors, who lost 45-34 at Letcher Central on December 19, gained a measure of revenge in edging the Lady Cougars 41-40 in the second round of the 1st Trust Bank Holiday Classic in Hazard.

LCC led 12-9 after the first quarter and 19-14 at the half. The teams were tied at 29-29 after three quarters before East Ridge hit a couple of huge treys down the stretch to hang on for the win.

Leslie Feenor led the 9-2 Lady Warriors with 14 points. Katie May chipped in with 12 points.

In a rematch in the opening round of the 1st Trust Bank Holiday Classic in Hazard, the highly ranked Harlan Lady Green Dragons easily defeated the Lady Cougars 65-38.