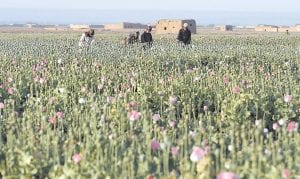 A team led by researchers at the University of California, Berkeley has identified the steps to make morphine and other painkillers in the laboratory without needing to grow opium poppies like these being harvested in Afghanistan last month. While homemade morphine is not yet a reality, researchers are calling for regulations. (AP Photo)

Scientists have figured out all the steps to make morphine and similar painkillers without using opium poppies, opening the door for homebrewed drugs and even wider abuse.

While no one has yet reported making morphine in the laboratory from scratch, some experts are calling for regulations to prevent garage tinkerers from making do-it-yourself morphine, which can be converted into heroin.

Society needs to “think this through now before it becomes a reality,” said bioengineer John Dueber of the University of California, Berkeley, who led a team that discovered the final missing link of the process.

Poppy plants have been farmed for centuries for opium, from which morphine is derived. The controlled substance is often used before and after surgeries to relieve severe pain.

For the past decade, various groups of researchers have hacked the DNA of yeast to mimic poppies, in hopes of creating cheaper and less addictive pain relievers. So far, the yeast strains created can only perform the last steps of a long process that can lead to morphine and other narcotic drugs.

A team led by researchers at UC Berkeley discovered the missing piece — the first step in the process — and published the findings this week in the journal Nature Chemical Biology.

The genetically engineered yeast was able to convert sugar to a chemical that’s a precursor to morphine. While the researchers stopped short of producing the drug in the lab, their work lays the foundation for DIY narcotics without the need to grow poppies.

Experts said it’s still extremely difficult for people to make homemade morphine because the process is inefficient. Even scientists are years away from lab-made morphine that’s strong enough to treat pain.

With technology advancing, some point out that there could come a time when brewing morphine may be as simple as brewing beer.

In a commentary published in the journal Nature, a group of researchers from the Massachusetts Institute of Technology and University of Alberta in Canada called for restricting genetically modified yeast strains to licensed facilities so that they won’t fall into the wrong hands. They also want current laws to be extended to make such yeast strains illegal to distribute.

Now is the time to act because “you don’t want to be doing it afterward. You can’t do it afterward,” Kenneth Oye, lead author of the commentary and director of the MIT Program on Emerging Technologies, said in a telephone interview.

Others said more discussion is needed to determine what regulatory controls should be in place.

“While there are risks of not acting quickly enough on modifying regulations during early technical development, there are also risks of too hastily solving the wrong problems,” Megan Palmer of the Center for International Security and Cooperation at Stanford University said in a statement.