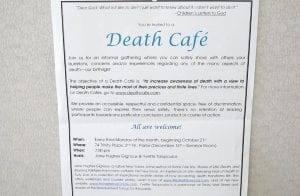 This Oct. 17 photo shows an invitation to a Death Cafe discussion in New York City. Death Cafes, where people talk freely about death-related issues, are rapidly spreading through the U.S. and the world. (AP Photo)

It can be tough to get a conversation going if you want to talk about the late stages of dementia, your last will and testament or the recent passing of your mother.

“When you’re at a cocktail party and you lead off by saying, ‘What do you think about death?’ it’ll be, ‘C’mon, man, it’s a party! Chill out!’ says Len Belzer, a retired radio host from Manhattan.

Belzer is among a growing number of people around the world who are interested enough in death to gather in small groups in homes, restaurants and churches to talk about it.

The gatherings, known as Death Cafes, provide places where death can be discussed comfortably, without fear of violating taboos or being mocked for bringing up the subject.

Organizers say there’s no agenda other than getting a conversation started — and that talking about death can help people become more comfortable with it and thereby enrich their lives.

“Most people walking down the street, they’re terrified of death,” said Jane Hughes Gignoux, 83, an author who leads Death Cafe gatherings at her Manhattan apartment. “But if you think of death as part of life and let go of the fear, you think more about living your life well.”

Jon Underwood, who organized the first Death Cafe in London two years ago, said he was inspired by death discussions pioneered by Bernard Crettaz, a Swiss sociologist. The first Death Cafe in the U.S. was held in Columbus, Ohio, last year, and “It’s just kind of snowballed,” he said, estimating nearly 300 Death Cafes have been held in the U.S., Britain, Canada, Australia, New Zealand, Italy, Portugal, Brazil and Singapore.

One was held at a Georgia cemetery. Sessions were scheduled this week alone in California, Colorado, Florida, New York, Ohio, Oregon, Pennsylvania and Washington.

At a recent two-hour Death Cafe shepherded by Gignoux, six participants, most in their 60s, talked easily over tea and biscotti.

Kathryn Janus, 66, noted that death involves “a lot of ‘why?’ Why did a 12-yearold with leukemia die? Why did a cat get run over?”

Marjorie Lipari, 68, talked about the death of her twin brother 16 years ago.

“What does one do with that kind of hole?” she asked. “It never occurred to me he wouldn’t be with me for my whole life.”

Robb Kushner, 62, discussed the differences between Christian and Jewish funerals he’d been to, noting the open casket at a Methodist wake. Alicia Evans, in her 40s, then told the tale of a man known to be a bit “scruffy” in life who was nicely tidied up by the embalmer.

“He looked so good in the coffin I wanted to give him my number,” she said, cracking up the group.

Janus said afterward, “I like that we laugh.” But Lipari said she wasn’t sure she would ever be entirely at ease about death.

“My ego is going to be opposed to death because that’s ego’s job,” she said. “My goal is to become comfortable with being uncomfortable about death.”

Other subjects commonly brought up at Death Cafes range from financial planning to suicide. They include cremation, memorial services, loved ones’ last moments and the possibility of an afterlife.

Underwood and other organizers emphasize that the discussions are not meant to be counseling. “There’s no guest speaker, no materials, because we’re not guiding people to any conclusions.”

And while the sessions attract a wide range of religions, races and ages, organizers note there are more people 50 and above than in their 20s.

Jane Bissler, incoming president of the Association for Death Education and Counseling, a professionals’ group, said she approves of the Death Cafe concept because people can speak freely about a subject that has become increasingly taboo.

“We’ve tried to shield our children. Some of them don’t know what to do at a funeral home or how to support a friend who’s lost someone,” she said. “We’ve raised a whole generation of folks that may not be talking about death.”

Audrey Pellicano, 60, a Death Cafe facilitator, said it’s not surprising baby boomers have avoided talking about death because their generation has been resisting aging for decades.

“We don’t deal with loss,” she said. “We know how to acquire things, not how to give them up. We have no idea how to leave this life and everything we’ve got.”

Gignoux said participants often bring up supernatural aspects such as communications from the dead. “Some people have very rich experiences,” she said.