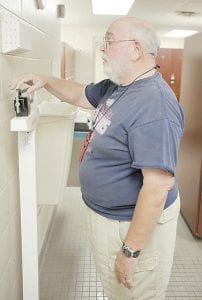 Retired accountant Paul Mullen weighs in before a diabetes prevention class at a YMCA in Indianapolis last week. Mullen, 66, has lost 18 pounds and brought his blood sugar down because of lifestyle changes he learned in the program. He pays $115 for the yearlong program, on top of his Y membership fee. (AP Photo)

When it comes to health care spending, an ounce of prevention is seldom worth a pound of cure.

Take Mrs. Jones, a hypothetical 55-year-old obese woman at risk for diabetes. It costs $900 a year to hire a personal lifestyle coach to help her lose weight and prevent diabetes. Suppose that the coaching works for Mrs. Jones, and she is spared diabetes and all the resulting health bills.

But research shows that for every person like Mrs. Jones, six other people just like her get nothing out of such a program. They either don’t lose weight or get diabetes anyway or wouldn’t have developed it in the first place. The yearly cost of the prevention program for those six people: $5,400.

That’s probably more than Mrs. Jones’ health bills from diabetes would have amounted to.

There goes your pound of cure.

The truth is, shockingly few prevention efforts actually save the health care system money overall, despite claims by the president and some in Congress.

Discussing daily aspirin use with people at risk of heart disease does save money. So do vaccinations for children. When doctors talk to smokers and offer medication to help them quit, that, too, saves money.

But those are the exceptions.

Prevention is a good deal, some experts say, if you can buy one year of perfect health for less than $50,000. The most-recommended prevention efforts — like flu shots for adults, Pap smears for women and colon cancer screening for people over 50 — meet that cutoff. But they certainly don’t save money.

Some say cost is beside the point, since those things save lives at what’s deemed a reasonable expense.

Back to Mrs. Jones. Helping 100 people like her would cost $270,000 over three years, but also would prevent 15 new cases of diabetes, avoid the need for blood pressure or cholesterol-lowering pills in 11 people, avoid $65,500 in medical spending for all 100 people and prevent 162 missed days of work due to sickness.

Dr. Ronald Ackermann at Indiana University School of Medicine in Indianapolis said recent studies suggest that offering the diabetes prevention program to groups of 10 people — instead of one-on-one coaching — can lead to similar benefits and cost as little as $15 per month.

The YMCA is offering just such a group program. Retired accountant Paul Mullen, 66, of Indianapolis, has lost 18 pounds since May and brought his blood sugar down because of lifestyle changes he learned. He pays $115 for the yearlong program, on top of his Y membership fee.

He feels better, his knees don’t hurt as much and he can’t wait to see his doctor’s reaction when he gets his next checkup.

“I should have done it years ago,” he said. “My daughter-in-law got after me. The wife did, too. So far, it’s worked.”

Michael Maciosek of HealthPartners Research Foundation in Minneapolis found that of 25 highly recommended prevention strategies, 15 cost less than $35,000 for every year of perfect health gained.

Those are definitely bargains if you’re using the arbitrary cutoff of $50,000 per healthy year to decide what’s a good investment in health spending. And some economists say Americans would be willing to spend even more than that, say $100,000 per perfect health year. No one really knows how much of the U.S. health care dollar goes toward prevention. The most commonly cited number — 3 cents of every health care dollar — is based on 20-year-old data.

An updated number — nearly 9 cents of every health care dollar — represents about $194 billion, said George Miller, who led the research for the Altarum Institute, a nonprofit consulting group.

President Barack Obama as recently as April said investing in prevention “will save huge amounts of money in the long term.” And it has become almost an article of faith among Republicans, Democrats and business leaders that prevention reduces health care costs.

But the Congressional Budget Office last week issued a statement on health care overhaul that dismissed the notion that prevention saves money. Prevention “would have clearer positive effects on health than on the federal budget,” the CBO said.

The Partnership to Fight Chronic Disease wants the budget office to be more generous with its review of prevention, to take a longer time frame and to calculate savings to the private sector in lower absenteeism and higher productivity.

But researcher Peter Neumann of Tufts Medical Center said counting on disease prevention to save money “promises painless solutions to our health cost problems. I don’t think they’re going to be painless and they have to be done.”

Supporters say each prevention effort should be held to the same standards as surgical techniques, drugs and medical devices, and not be expected to save dollars: Does it work and at a reasonable cost?

Prevention efforts with high value, although not cost-saving, include flu and pneumococcal shots for adults, Pap smears to screen for cervical cancer, colon cancer screening for people 50 and older, and screenings for vision problems, high blood pressure, high cholesterol and problem drinking.

Each of those things costs less than $35,000 per year of perfect health.

Those strategies are a good place to start when money is limited, experts say.

“Some preventive services save money and some don’t. Many of the services that don’t save money improve people’s lives at relatively low cost,” said Robert Gould, president of the nonprofit Partnership for Prevention. “I think that’s what the American public wants from health reform.”