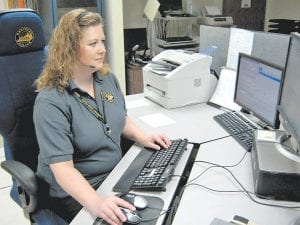 “The best part of the job,” says Miria Thomas, a Kentucky State Police dispatcher from western Kentucky, “is knowing that I have helped someone in some way and that everyone on my shift went home safe.”

Note: April 13-19 is National Public Safety Telecommunicators Week, a time set aside to recognize the more than 200,000 individuals throughout the U.S. who play critical roles in the delivery of public safety services. Often called the “unsung heroes of public safety,” these men and women provide a lifeline to both citizens in need and officers in the field. They serve as an unseen, but vital link in keeping law enforcement officers and the public safe at all times of the day or night.

The Kentucky State Police employs 163 telecommunicators at 16 posts throughout the state and one headquarters location. In 2013, they answered a total of 529,179 requests for assistance. The following incident illustrates the impact these dispatchers can have in the performance of their daily duties.

On the night of May, 5, 2013, Miria Thomas, a telecommunicator at Kentucky State Police Post 2 in Madisonville, was at home enjoying an evening of television when she received a text message from one of her fellow dispatchers. The post had received a call from a subject who said he was feeling homicidal and suicidal. Troopers responding to the call discovered the subject had barricaded himself in an abandoned apartment and was armed with knives. His behavior was erratic and escalating. He told troopers that he wanted to talk with Thomas or he was “going to start killing someone.”

When she found out the identity of the subject, “My heart almost stopped beating,” says Thomas. Although she had never met him face-to-face, he was no stranger.

“ I first remember having contact with the subject when I worked the midnight shift from 1998 to 2008,” Thomas recalls. “He would often call to make a complaint on being threatened or assaulted. I would send him the help he needed and he would always call back and thank me for helping him.”

“As time went on, he began to call to just thank me for listening to him and helping him,” she says. “These short conversations were often just to let me know if he was having a good day or week or a hard time. I would try to encourage him and let him know he was not alone during his struggles in life and advise him where he could seek the appropriate help he might need, help that KSP could not give him.”

Thomas immediately volunteered to talk with the subject by phone. She paced back and forth in her bedroom waiting for the call to be patched through.

“I knew I was ready to help the subject because I had spoken to him so many times over the years,” she says. “For him to be personally asking for me in this most critical hour of need showed that a strong form of trust had been achieved and I was not going to let him or my troopers down.”

Thomas felt at a disadvantage however. “The hardest part was doing this from my home,” she explains. “I was not in my comfort zone. I could not hear the troopers or have constant contact with them. Not being at work put me at a disadvantage and I was concerned about making a mistake that could get a trooper or the subject hurt.”

Finally the phone rang and the dispatcher on duty told Thomas she was patching her through to a trooper’s cell phone. She heard the trooper tell the subject, “We have Dispatcher Thomas on the phone and she is going to talk to you on speaker phone.”

“I first asked the subject if he could hear me,” Thomas recalls. “When he heard my voice, he began to sob and cry out my name over and over. He said he was so scared and wanted to be placed into protective custody. He said he was so glad to talk to me and he knew everything was going to be all right now.”

She then heard one of the troopers on the scene say, “Dispatcher Thomas wants me to place you in protective custody now.”

Shortly thereafter, Thomas called Post 2 and was told that after talking to her, the subject had surrendered his weapons, exited the apartment and was taken into custody without further incident. Both the subject and all the troopers involved were fine.

“They told me it was a good thing that I was able to talk the subject out because troopers on the scene had reported they were getting nowhere talking to him and his actions and mental state would most likely have caused them to use extreme force with possibly fatal results,” she notes.

Thomas has still never met the subject she helped that night. Yet she believes her phone contact with him over the years made the difference. “I never at any time made any promises to him and I never lied to him, even if the truth was not what he really wanted to hear,” she points out. “He just needed someone to listen. I believe that is the reason he called KSP and asked for me personally.”

Thomas has been a telecommunicator for KSP for 15 years. Prior to that, she worked as a dispatcher for the Dawson Springs City Police for three-anda half years. She credits these years of experience with aiding her actions that night.

“I have spoken to callers in the past who have talked about ending their lives or wanting to hurt others,” she says. “Each call is completely different and you learn something from each call you take. These lessons you learn just help you prepare for the next call.”

“I learned mostly that you do affect the people you speak to and help even if you never think anything you do or say matters,” she adds. “There will be someone out there who will remember who you are for what you did or did not do for them.”

“The best part of the job,” she concludes, “is knowing that I have helped someone in some way and that everyone on my shift went home safe. It’s a great job for someone who wants to help others and does not need acknowledgement for it. The reward is knowing you made a difference.”