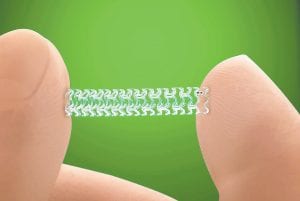 This undated image provided by Abbott shows its experimental heart stent “Absorb.” Doctors say the new type of heart stent that works like dissolving stitches, slowly going away after it has done its job, passed its first major test in a large study. (Weinberg- Clark Photography/Abbott via AP)

Now you see it, now you don’t. A new type of heart stent that works like dissolving stitches, slowly going away after it has done its job, passed its first major test in a large study, doctors said this week.

Abbott Vascular’s dissolving Absorb stent performed as well as a conventional stent in the one-year study, but the fact it did not prove superior led some experts to be wary.

Still, the results on this and other novel stents currently in testing are fueling hope for a new generation of these devices, used on about 850,000 heart disease patients each year in the United States alone.

Stents are tiny mesh cages that keep blood vessels from reclogging after an artery-opening angioplasty procedure. The ones available now in the U.S. are permanent implants made of metal, usually coated with a material that oozes medicine, but they sometimes cause inflammation and other problems years down the road.

The Absorb stent, already sold in Europe, is made of a degradable material that’s designed to stay intact and release medicine for a year, then break down over the next two years.

“It holds the artery open long enough for the artery to heal,” then completely goes away, said one study leader, Dr. Dean Kereiakes of Christ Heart and Vascular Center in Cincinnati. “It can return the artery to its normal, natural structure and function.”

The study involved about 2,000 patients with chest pain due to one or two clogged arteries, and was aimed at winning Food and Drug Administration approval to sell Absorb in the U.S.

In the study, those treated with the dissolving stent fared as well as those given a conventional Abbott stent called Xience. After one year, 6 percent to 7 percent of both groups had died of a heart-related cause, had a heart attack due to a problem with the treated artery or needed a new artery-opening procedure.

The dissolving stent did not prove better, though, on several measures, and the trends were leaning in the opposite direction, noted Dr. Robert A. Byrne of the Technical University of Munich, who has been a paid speaker for some rival stent and heart device makers.

He wrote a commentary published online with the study by the New England Journal of Medicine. Results also were discussed earlier this week at a meeting of heart specialists, the TCT conference, in San Francisco. Abbott sponsored and helped designed the study, and several study leaders consult for the company.

The idea of a dissolving stent is attractive, but “promise alone is not enough to make us unconditionally embrace this technology,” Byrne wrote. A longer study underway now of 5,000 patients “will go a long way toward determining whether this promise will become a reality.”

Being as good as a stent currently sold is all Absorb had to prove, said another study leader, Dr. Gregg Stone of Columbia University Medical Center.

“The question is what does it take to get it on the market?” he said. “No one expected superiority in the first year. We expect the real benefits of this technology to be when it dissolves, over several years” in terms of lower complication rates, he said.

The study lasted only a year; participants will be tracked longer to see how they fared when the stent dissolved. Previous studies showed the stent does dissolve as intended.

Phyllis Camp, a retired social worker from Pine Valley, Mississippi, was the first person in the U.S. to get the dissolving stent through the study in December 2012.

“What appealed to me is the fact it would allow my body to heal itself and I wouldn’t have anything metal left behind. It seemed much more natural to support the artery till it could heal itself,” she said.