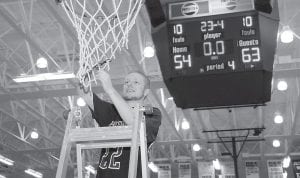 DISTRICT CHAMPS — Letcher County Central’s Devon Blair took his turn at trimming the nets after the Cougars defeated Knott County Central for the championship of the 53rd District. (Photo by Chris Anderson)

The Letcher County Central Lady Cougars overcame their own first-half ineptness and then hammered Perry County Central 55-34 to win their opening round matchup in the 14th Region Tournament opener Monday night in Hazard.

The heavily favored Lady Cougars stumbled and fumbled their way through a nightmare first half in which they made 12 turnovers and were outrebounded 26-16.

In tournament action, i t isn’t about how well you play in winning but that you do win and move on.

LCCHS found itself trailing (24- 23) an opponent at the half for the first time since losing for the last time back on Jan. 17. Since that 60- 55 loss at Breathitt County, the Lady Cougars have now won 15 straight and are 27-4 overall and will meet 11-17 Estill County in the regional semifinals at 6:30 on Friday nigh. Estill County defeated Wolfe County 68-62 in their opening round matchup on March 2.

Coach Dickie Adams switched defenses to start the third quarter from a full-court man-to-man to a trapping half-court zone that must have made the Lady Commodores feel much as General Custer must have felt back in 1876.

After freshman guard Haley Whitaker’s short jumper gave LCCHS a 25-24 lead, Kayla Rankin’s short jumper pushed PCCHS back in front 26-25 with 7:03 left in the third quarter. Those would be the last points scored by PCCHS until Randi Napier’s 15- footer with 4:05 left to play. During the 11 scoreless minutes between the two PCCHS baskets, LCCHS scored 25 points with junior forward Shannon Bays accounting for 14 on seven-of-nine field goal attempts from sweet passes into the post. Bays finished with a game-high 19 points with only two coming in the first half.

In the first half, PCCHS exploited its speed and quickness with dribble drives to the basket or to the foul stripe —- fortunately the Lady ‘Dores made only 3-of-15 from the charity line in the first half or they could have enjoyed a sizable first-half lead.

Against the LCCHS zone trap in the third quarter, PCCHS made nine turnovers and was one-forfive in field goal attempts.

Senior forward Sharaye Kincer turned in another solid performance on both ends of the floor with another double/double of 13 points and 13 rebounds.

PCCHS finished its season with a 14-14 mark and it was led in scoring by Whitney Back’s eight points. Kayla Rankin wound up with seven points. scored a bucket and the lead was 51-44 Cougars.

A big sky hook by Eric Ison made the score 53-46 and then he came up with a huge block that set up a drive to the goal by Banks and a 55-46 Cougar lead. Ison played the game of his career on both ends of the floor.

The Crusaders ran out of gas as the Cougar pressure was too much. Devon Blair hit 5-6 free throws down the stretch and the Cougars pulled out a hard fought 63 -51 victory. They really dug down deep after half-time and hit another gear as they outscored the Crusaders 43-20 after the break.

The Cougars advanced to the championship game against Knott County with a record of 20-7 and the Crusaders ended their season at 18-10. The Cougars shot 31-50 from the field and 16-21 from the charity stripe. They hit 5-12 from behind the arc and outrebounded the Crusaders 41-32.

This was the final time that we were able to see big man Garrison Collins for the Crusaders as he will graduate and move on. He has had a great career and was a gentleman off the court and a warrior on it. He finished with 6 points, 10 blocks and a bunch of rebounds.

The Cougars were led in scoring by Devon Blair with 19 points followed by Cole Cornett with 13 as he came up huge in a big way. Josh Proffitt hit three treys and started the run in the third that turned the game around. Big Eric Ison played his heart out and scored 9 points and had three blocks. Charlie Banks kept the Cougars motivated with his hustle and defense and he had 6 points. Ryan Brock and Logan Johnson contributed with 3 and 2 respectfully to round out the scoring.

On Saturday night it was the championship of the district as the Cougars took on the homestanding Knott Central Patriots. The Cougars have looked for a signature win all year against one of the region’s top teams and this was their chance to get one against the Patriots on Knott County’s own floor. The Cougars lost twice to the Patriots this season and Tate Cox had been unstoppable against the Cougars.

The Cougars and senior Charlie Banks owned the first quarter as Banks poured in 8 in front of a huge crowd of Cougar fans. The Cougars led 18-8 after one.

It was a slow style of game for two teams that are known for their offense, but the night belonged to the defense. The Cougars got a big lift off the bench in the second quarter from freshman Logan Johnson as he would not be stopped and hit for 8 points. Johnson and Banks combined for 19 first half points as the Cougars led 27-23 at the break.

Banks took over in the third as the Patriots had no answer. He put in 8 more in the third and, after a Johnson trey, the Cougars led 36- 28 as the freshman had ice water in his veins.

The lead grew to 10 after three at 40-30, but the Patriots mounted a comeback. They scored the first four points of the fourth quarter to pull within 40-34, but Banks and Company would not be denied on this night. He had a monster game as the Cougars hung on down the stretch and beat the Patriots 63-54.

Banks, who quarterbacked the Cougars in football to the state’s Elite 8, led them on this night with 26 points and was followed by the freshman who will take his spot on the football team at quarterback, Mr. Logan Johnson with 16 points.

t was defense on this night for the Cougars as they held the dynamic duo of Tate Cox and Stewart Stamper in check most of the night. Cox made only 4-17 and Stamper was 4-18.

The Cougars shot 48 percent for the game on 22-46 from the field. They were 4-10 from downtown and 15-20 from the charity stripe. They led the battle of the boards 36-35. The Cougars got 8 points from Josh Proffitt, 4 each from Cole Cornett and Eric Ison, Devon Blair finished with 3, and Ryan Brock had 2.

The Cougars did what they had to do to win. It wasn’t pretty but, man, was it effective. Now it’s on to the 14th Region Tournament at Powell County this week and the Cougars will get to play a team from the losers bracket as the road to Rupp continues.