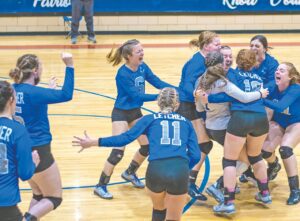 The Letcher County Central Lady Cougars volleyball team, seen here celebrating after winning the 53rd District Tournament last week, won its fourth game in a row Monday to advance to the semifinals of the 14th Region Tournament in Hazard, where they were set to meet Powell County late Tuesday. The Lady Cougars entered the semifinal game with a record of 19- 16 after defeating Wolfe County Monday, three sets to one. LCC won the district tourney with twin 3-0 wins over host Knott Central and June Buchanan. The winner of Tuesday’s match with Powell County advances to Thursday’s tourney finale against the winner of the other semifinal match between Knott Central and Leslie County. (Photos by Chris Anderson)