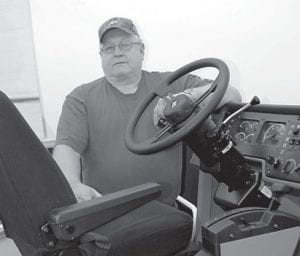 Murrel Dixon, with nearly four decades of working in the coal industry, has been named coordinator for the Southeast Mining Academy. The academy — one of four located in Kentucky — is operated locally by Southeast Kentucky Community and Technical College.

A native of Blackey, Dixon assumed the leadership role recently following the retirement of Ed Wright.

Dixon has been affiliated with SKCTC for 17 years and will head a team whose goal is to provide quality safety and workforce training to miners throughout the region. More than 3,000 coal miners were trained by the academy in 2009.

The academy is a component of the Kentucky Coal Academy, which operates from sites at community colleges in Cumberland, Hazard, Prestonsburg and Madisonville.

Dixon began his career as an employee of the International Harvester-owned mine at Benham where he worked 15 years. He then worked for Arch of Kentucky for five years, and for Drummond Mining in Alabama for two years before returning to Kentucky.

As the chief of the Southeast Mining Academy, Dixon and J.P. Campbell, Wade Smith and Ruby Maggard provide instruction and retraining for novice and veteran miners. State-ofthe art training simulators are used to teach safe and proper procedures for key mining jobs such as roof bolting, truck driving, front-end loader operation, shuttle car operation and the operation of a continuous miner.