Do-ahead mashed potatoes to save time and sanity 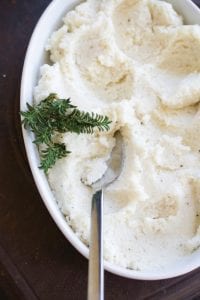 One of the most stressful parts of hosting a large dinner party is figuring out how to time everything so all the food arrives at the table piping hot and at its prime.

This is especially true of Thanksgiving — the dinner party to end all dinner parties! Getting everything timed right is a crazy juggling act, even if you make good use of the turkey resting time (that 30-minute period between when the turkey comes out of the oven and when it is ready to be carved) to finish prepping the other dishes.

Traditional mashed potatoes pose a special prob- lem. You can try making them ahead of time, then reheating them at the last minute, but then they tend to taste stale. Theoretically, you can make them from scratch as the clock ticks down, but good luck pulling that rabbit out of a hat while you’re simultaneously whipping up a pan gravy and finishing off your sides in a kitchen full of hovering relatives.

Here’s my solution — cook and mash the potatoes without any seasonings or dairy the day before, then pop them in the refrigerator. When you’re ready to serve them, nuke them and add the dairy at the last minute.

Why does this work? Because it’s the reheated butter and milk or cream than causes the off flavors. Leave those out until the potatoes are already reheated and you’re good to go.

Which potato to use when making mashed potatoes? Once upon a time there was only one answer: the russet, widely known as the “baking potato,” the most famous of which is the Idaho. It is high in starch and gets fluffy when cooked. In recent years, though, some folks have begun to swear by the Yukon gold, a medium-starch spud with a buttery hue.

In the spirit of rigorous open-mindedness, I tested them both for this recipe. and ended up going with the russet. I just liked the taste better. In the same spirit, I tested two different cooking methods — baked and boiled. And the baked version won hands-down. The flavor was just more potatoy. Admittedly, baking takes longer than boiling, but you save time because there’s no peeling or dicing needed.

There are three tools for mashing a potato: the food mill, the potato masher and the potato ricer. Most home cooks don’t have a food mill, so we’ll ignore that. The masher produces lumpy mashed potatoes, but some folks like them just fine that way. The ricer, designed like a potato-sized garlic press, is my favorite of the three. Of course, if you have none of these gadgets in your house, you can just use a fork.

But whatever you do, do not put the hot, cooked potatoes in a food processor, blender or mixer. You will end up with wallpaper paste.

In an effort to slim down this classic recipe, I have used low-fat milk in place of cream or whole milk, with just a touch of butter (you have to have some butter), and a cup of lowfat sour cream, which provides creamy texture and savory tang. It’s delicious, I promise.

Use a paring knife to prick the potatoes in several places. Place the potatoes on a rimmed baking sheet and bake on the oven’s middle shelf until a knife goes through with no resistance, about 45 to 50 minutes. After they are baked, cut the potatoes in half lengthwise and set aside to cool for 5 minutes.

Use a spoon to scoop out the pulp from each potato half and transfer it, in batches, to a ricer or a food mill fitted with the finest blade. Force the potatoes through the ricer or mill into a microwave-safe bowl. Let cool, then cover and refrigerate overnight.

Just before serving, microwave the potatoes, covered loosely with plastic wrap, for 2 minutes. Stir and heat for another minute. Repeat the procedure until the potatoes are hot. Stir in 1 cup of the milk, the sour cream, the butter, and salt and pepper to taste, then heat for another minute, or until hot. Thin with additional milk if you prefer a lighter softer texture. Serve immediately.