Do antibiotics in meat hurt us? 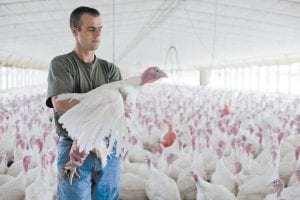 David Martin is shown with his turkeys raised without the use of antibiotics at his farm in Lebanon, Pa. The Food and Drug Administration has called on drug companies to help limit the use of antibiotics in farm animals, a decades-old practice that scientists say has contributed to a surge in dangerous, drug-resistant bacteria. (AP Photo)

The bacon you had for breakfast is at the center of a 35-year debate over antibiotics.

That’s because the same life-saving drugs that are prescribed to treat everything from ear infections to tuberculosis in humans also are used to fatten the animals that supply the chicken, beef and pork we eat every day.

Farmers say they have to feed the drugs to animals to keep them healthy and meet America’s growing appetite for cheap meat. But public health advocates argue that the practice breeds antibiotic-resistant germs in animals that can cause deadly diseases in humans.

The U.S. government moved to ban the use of some of the drugs in animals in the 1970s, but the rule was never enforced. Then earlier this month, the Food and Drug Administration outlined plans to phase out the use of antibiotics in farm animals for nonmedical purposes over three years.

The U.S., the biggest global consumer of meat by far, follows Europe and other developed nations in restricting the use of penicillin and other antibiotics in animals. The issue has moved to the front burner as documentaries such as “Meet Your Meat” and “Food Inc.” have led Americans to focus more on what goes into their food. Sales of antibiotic-free meat, for instance, are up 25 percent to $175 million in the past three years.

“Consumers are beginning to understand the cost of eating cheap meat,” said Stephen McDonnell, CEO of Applegate Farms, which markets antibioticfree meats and cheeses. “As people really understand what it takes to create a healthy animal they will probably eat less meat, but they are going to eat better meat.”

Antibiotics have been hailed as one of the greatest medical discoveries of the 20th century since their first use in humans in the 1940s. They’ve enabled doctors to cure deadly bacterial diseases like tuberculosis, typhoid fever and meningitis.

The FDA approved the use of antibiotics in livestock in the 1950s after studies showed that animals that got the drugs in their feed put on more weight in less time than animals on a traditional diet. For example, pigs that got an antibiotic were shown to need 10 to 15 percent less feed to reach the same weight as pigs on regular diets.

Since feed can account for as much as 70 percent of total animal production costs, the discovery was a windfall for farmers. It meant they could produce more meat for less money, resulting in fatter profits.

But by the 1970s, researchers began warning regulators that routine use of antibiotics was contributing to a surge in drugresistant germs, or superbugs, that render antibiotics powerless against deadly infections. Professor Stuart Levy of Tufts University conducted the first study in 1976 showing highly-resistant e. coli E. coli bacteria could pass from chickens to farm workers who worked with the animals in just a few weeks.

The study contributed to the FDA’s decision to ban nonmedical use of penicillin and tetracycline in farm animals a year later. But farmers and drugmakers pushed back, and the FDA rule was never enforced.

“Why did no one act on it? Because there was a strong lobby,” said Levy, who is co-founder and president of the Alliance for Prudent Use of Antibiotics, a nonprofit advocacy group that favors restrictions on the drugs. “They said, ‘Well, show us the deaths. Show us the real problem. Otherwise, this isn’t so terrible.”

But it’s difficult to link the overuse of antibiotics to deaths. It’s tough to find the source of bacteria-resistant germs, which can spread from animals to humans through a number of ways, including undercooked meat and drinking water contaminated by animal waste. And bacteria mutate when passing between species, meaning that the same strain of drug-resistant bacteria in chicken can take on a different form once it enters the human body.

While the issue mostly was tabled in the U.S., it was gaining momentum elsewhere in the world.

In 1999, the European Union backed a ban on penicillin and other human antibiotics for growth in farm animals. Within four years, the use of antibiotics on animals fell 36 percent in Denmark, 45 percent in Norway and 69 percent in Sweden.

Levy, the Tufts University professor, and his colleagues had hoped that the EU’s ban would bolster the case for restricting the use of antibiotics in the U.S. But instead, the data has been used to argue both sides of the issue.

U.S. farmers have seized on reports that cases of diarrhea among young pigs increased in the first year after the EU ban, suggesting that animal health had declined. But public health advocates say that the outbreaks among pigs decreased once farmers improved the sanitary conditions by cleaning feedlots more frequently and giving animals more space.

U.S. groups like the National Chicken Council warn that restricting use of antibiotics will result in sicker animals, increasing costs for farmers — and the price of meat and poultry for consumers. Some industry groups have projected costs for farmers would rise by $1 billion over 10 years, though those estimates have not been backed by outside groups.

“The bottom line is that if these products go away, it may result in sicker pigs, more expensive food, and we don’t think it will improve public health,” Wagstrom said.

Meat prices in Europe have not risen dramatically since the EU’s ban. Danish authorities estimate the total costs for pig farmers increased by just 1 percent, or about $1.35 for every pig slaughtered — far below food industry estimates.

U.S. health experts suggest the increase here would be modest, too. The Institute of Medicine, a non-partisan nonpartisan group of medical experts who advise the federal government on public health issues, estimates the average U.S. consumer would spend between $5 and $10 more per year on meat if antibiotics were restricted.

Farmers continue to argue that antibiotics are necessary to have a steady supply of low-cost, disease-free meat for Americans, who eat about three-quarters of a pound per day — roughly twice the global average. They acknowledge that antibiotic-free animals can be raised by small, organic farms but say large-scale meat production requires antibiotics to keep animals healthy.

“We’re pretty darn committed to our cattle, and our goal is to not have them get sick,” said Mike Apley, a cattle farmer and professor of veterinary medicine at Kansas State University.

Farmers like Apley also point to a handful of studies that conclude the risk to humans is extremely low. One 2004 estimate conducted by scientists consulting for the meat industry, for instance, placed the likelihood that antibiotic would not work in a human due to animal use at 1 in 82 million.

And, they argue, it’s the overuse of antibiotics in humans — not animals — that’s causing a rise in drugresistant bacteria. Indeed, for decades, doctors have prescribed antibiotics for common ailments like the flu and sinus infections that are not caused by bacteria. Studies show doctors often feel pressured to prescribe the drugs.

“The problem is not an animal or human issue per se,” said Dr. Tom Chiller, associate director for epidemiologic science at the Centers for Disease Control and Prevention. “It’s about using the antibiotics as judiciously as we possibly can in situations where they are needed.”

Some Americans are becoming more aware of the issue. Liza Greenfield, 33, said she will only buy organic, antibiotic-free meat at farmers markets because she doesn’t think animals should be given antibiotics for growth.

“A cow is supposed to eat grass,” said Greenfield, an administrator at the New York University. “I want to know it was out on the pasture eating grass.”

As Americans show more interest, so are companies. Some of the largest restaurant and grocery chains including Kroger and Safeway now offer antibioticfree meat. And last month, executives from companies such as Chipotle Mexican Grill and Bon Appetit food services that offer antibiotic free meat and poultry gathered in Washington to lobby for restrictions on the use of antibiotics in animals.

The FDA earlier this month said it would ask drugmakers to voluntarily stop marketing antibiotics for non-medical uses on their labels with a goal of completely stopping the practice in a few years. Animal drugs can only be legally prescribed for uses listed on the label, so the change is expected to have a major impact on how farmers use them.

Some public safety advocates complained that the FDA, which worked with drugmakers on the proposal, should have mandated the change. But the FDA said a formal ban would have required individual hearings for each drug, which could have taken decades.

“We think the science is very solid in showing that largely indiscriminate use of antibiotics contributes to resistance,” said FDA Deputy Commissioner MichaeI Taylor. “I don’t think there’s really any question about it.”