Do not run the Kentucky Derby at night

By BILLY REED
Special to The Mountain Eagle 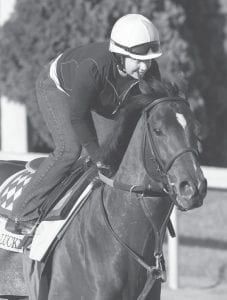 The addition of light poles around the track at Churchill Downs has done more than make the hallowed home of the Kentucky Derby look like your basic NASCAR or harness-racing oval. It has inspired thoughts that sooner rather than later, the world’s most popular race will be run at night.

Back in the day, the Derby was run around 5 p.m. But then TV kept pushing the post time back, back, back until now it starts at around 6:30. Although there’s still plenty of daylight at that time on the first Saturday in May, it’s still too early for prime time, the 8-11 p.m. period when the Neilsen ratings say most Americans are most likely to be watching the tube.

Well, that would be the final straw for me. Churchill Downs ceased to exist as I’ve known and loved it when the track built those twin towers of luxury suites that now dwarf the historic twin towers on both sides.

Besides ruining one of the most familiar tableaus in sport — the traditional photo of the winner hitting the finish line framed by the spires in the background — that bit of “progress” managed, in one fell swoop, to turn an authentic American sporting shrine into just another gambling casino.

You do know that the lure of expanded gaming was behind the Churchill renovation, right? When Kentucky approved slots and other forms of casino gambling, Churchill wanted to be ready to go.

Unfortunately for the track, its leaders didn’t foresee the rise to power of Sen. David Williams, who has done a masterful job of stopping all expanded gaming proposals since becoming Senate Majority Leader.

Never mind that the thoroughbred industry has trotted out all sorts of statistics to prove it needs the revenue from expanding gaming to remain competitive with rival states, which are using purses fattened by alternative forms of gambling to siphon horses and stables away from Kentucky.

Anyhow, Churchill Downs is now a casino waiting to happen, a monument to tackiness instead of a shrine to tradition and taste. So why not light poles around the track? Heck, why not get rid of the spires altogether and replaced them with twin drumsticks in honor of YUM! Brands, the Louisvillebased, fast-food conglomerate which has been allowed to tackily tack its name onto the Derby.

I have missed the Derby only twice since 1966 and it’s still my favorite sporting event because I prefer to focus on what’s it’s really all about — the horses and the people who care for them — instead of the corporate glitz and Hollywood glamour and spinoff events.

I am proud to say that I have never attended either Thunder Over Louisville or the Barnstable- Brown party. The former has too much traffic and noise, the latter too much superficiality.

I mean, did you know they actually pay “celebrities,” some of whom are unknown outside the worlds of reality TV and hip-hop noise, to come to the Derby so they can be wined, dined, and photographed? This is how desperate Louisville has become to get into gossip rags, blogs, and TV shows.

So why not light poles and a 9 p.m. post time for the Derby? If there’s one thing we know for sure about modern America it’s this: Nothing is sacred anymore. Everything is for sale. TV and the corporations call the tune and everybody else dances like crazy until they drop or go broke. They shoot horses, don’t they?

Not that anybody cares, but the Derby will lose me when it goes to a prime-time post. It’s tough enough to deal with a mob of drunks when it’s still daylight. But it’s impossible to even imagine how big a nightmare traffic and security will become, especially if the weather is bad.

The last time a major sport moved its signature event from the afternoon to night, it proved to be a disaster. Remember when all the World Series games were played in daylight and baseball owned October? That ceased to exist when they started playing the games in prime time.

Still, no matter where greed and tackiness drive the Derby, it still will be about the horses and the people who care for them. That’s the one thing that hasn’t changed since 1875, when the Derby first was run at Mr. Churchill’s new track in the South End.

For anybody who thinks he or she has this Derby figured out, I have three words: Mine That Bird. He came from nowhere to win last year’s race and returned to nowhere after it was over — he hasn’t won since. But at that particular time on that particular day, he was the second coming of Citation.

Much credit goes to jockey Calvin Borel, who has succeeded Pat Day as Kentucky’s favorite jockey. After dropping Mine That Bird back to last place, Borel guided him through and around horses with amazing skill and grace. Holes opened magically at just the right time, including the one on the rail through which Borel gunned Mine That Bird in the last eighth of a mile to shock the world.

Borel’s mount this year is Super Saver. If he wins, it not only will give the jockey his second consecutive Derby win and third in four years, it will end trainer Todd Pletcher’s 0-for-24 run in the Derby and erase the trainer’s disappointment of having to scratch Eskenderyea, the early favorite, last Saturday due to a leg problem.

That’s a Derby story we can all wrap our arms around. But too would a victory by the filly Devil May Care or popular trainer Bob Baff ert’s Lookin at Lucky or Blue Grass Stakes winner Stately Victory, the first Derby horse co-owned by a U.S. Senate candidate (state Attorney General Jack Conway).

That’s the thing about the Derby. Unlike other major sporting events, it always produces a deserving winner and a good story. Always. Sometimes the best horse wins, sometimes it doesn’t. But the public always wins even if most end up tearing up their parimutel tickets instead of cashing them.

Forms tells us that the best two horses in the race are Lookin at Lucky and the horse who beat him in the Santa Anita Derby, Sidney’s Candy. So I’m going to take those two and box them with two others — probably Stately Victory and the longshot Paddy’s Prado — in a $2, four-horse exacta box that will cost me $30.

When the lights come on after the race — the ones in my head, not the new ones in the track — I’ll probably feel stupid for not seeing the obvious. The Kentucky Derby can humble the richest and the smartest of us and that’s not a bad thing, considering how little humility exists in corporate America.

Billy Reed is an award-winning
sports columnist and horse racing
writer who has worked for Sports
Illustrated magazine, The Courier-
Journal of Louisville, and the
Lexington Herald-Leader.