Doc is focus of Alzheimer’s study 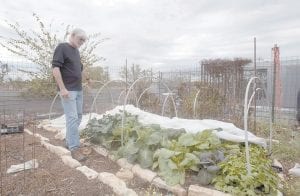 Dr. Dewayne Nash checks out his garden at his home in Bertram, Texas. Nash, a family physician, is diagnosed with Alzheimer’s disease. (AP Photo/Austin American-Statesman)

Dr. Dewayne Nash sat in an oversized leather chair and gazed out on his organic garden. He recalled a year-old scene in Dallas that changed his life. “It was like I was in a dream,” he said. A very bad dream.

“I can remember looking out that window, and the examiner was asking me questions,” Nash, 61, said in a drawl that nods to his Arkansas roots. The answers weren’t coming.

Nash had gone to the University of Texas Southwestern Medical Center as a healthy volunteer, or control, in a clinical trial to study Alzheimer’s disease. He wanted to help advance research into the memorydestroying disease after seeing both of his parents (now deceased) and a brother struggle with it. But he was struggling to recall words the examiner was using to test his short-term memory.

Suddenly, he was staring down his greatest fear.

Within a month, he would be diagnosed with mild cognitive impairment, which can be an early warning sign of Alzheimer’s disease. Instead of being a control in a study expected to shed new light on Alzheimer’s, he would be a patient.

That day in Dallas, “ I knew I had it right then,” Nash said.

He knew what he would do. He would be open about it and be an advocate, not only continuing in the study but speaking to groups to promote education about a disease called “the epidemic of the 21st century.”

He also had to do something he had thought was years in the future. He had to quit the job he loved: being a family practice doctor for more than 25 years.

“I had this big fear of having it sneak up on you while you’re practicing medicine” and missing a diagnosis or making a prescription error, Nash said.

He had treated the occasional Alzheimer’s patient, but when it hit his family, he became more aware of its devastation. About 5.4 million Americans, including 340,000 Texans, have the disease, according to the Alzheimer’s Association. Those numbers are expected to triple by midcentury, a strain some experts say could collapse the health care system.

The study at UT Southwestern, one of 55 research sites in the U.S. and Canada, is using brain scans, spinal fluid and genetic markers in the blood to track the progression of Alzheimer’s disease. It started in 2004 but was expanded in 2009 when the study showed that a test could help identify the earliest stages of the disease by measuring two biomarkers in cerebrospinal fluid as risks for Alzheimer’s.

He didn’t tell anyone at the Austin Regional Clinic’s Cedar Park location where he worked that he was leaving. His wife, Jo Ann, knew but was in denial, she said. A few days before Christmas, she received a text message from her husband instead of his usual phone call. She didn’t realize it was because he had left the clinic for good and couldn’t talk. He was in tears.

He cried again when he blogged from his countrystyle home, 10 miles east of Bertram, about how grateful he was to have been a doctor. He started the blog Aug. 7, 2010, with a focus on organic gardening: www.organicgreendoctor.com. Now it’s mostly about his journey with Alzheimer’s.

After the test in Dallas, Nash started connecting the dots. There had been patients’ names and visits he couldn’t remember. He had had trouble retaining material in a medical/legal course and had gotten a low score. It was taking him longer to do calculations in his head for prescription doses.

“It was all real subtle stuff,” he said.

Neither his wife nor Debra Campise, the meticulous nurse who worked alongside him for eight years, had noticed anything.

“He’s so smart,” Campise said earlier this month. She wept when he told her the news.

He loved treating children and was gentle and laid-back with all of his patients, Campise said. He made children laugh when he imitated Donald Duck’s voice. Many of them called him Dr. Duck.

“He has a good sense of humor,” said Darlene Guynes, clinic manager at Cedar Park. His departure “was taken very hard by the entire clinic, staff and patients.” Some patients had followed him from his previous practice in Temple, driving the 50 miles.

“I’m one of those few lucky people who got to do what they wanted to do,” said Nash, who had wanted to be a doctor since seventh grade.

Last Christmas was tough, said Jo Ann Nash, 58, a creative writing and reading teacher at an alternative school in Round Rock. Her thoughts were frightening: “He’s sharp; he’s my rock. He’s always taken care of everything, fi- nances and record keeping. I’m such a ditz, and he’s so brilliant. Oh, my God, what am I going to do?” she said.

On New Year’s Eve, an email from a nephew suggesting a book of Zen stories changed everything, she said.

“It was so precious, and we realized how thankful we were for everything,” she said. “We wrapped our minds around that, and I haven’t been weepy since.”

Nash went on medication the day he was diagnosed with mild cognitive impairment nearly 11 months ago. The drug, donepezil, or Aricept, “can slow down the transition from those early stages of mild cognitive impairment to dementia,” said Nash’s Dallas doctor, Mary Quiceno, an assistant professor of neurology and neurotherapeutics at UT Southwestern.

“The earlier we diagnose and start the medication, the better,” said Quiceno, who also is director of the cognitive and memory disorders clinic there.

Nash said it’s possible he has dementia and not Alzheimer’s. A definitive diagnosis still requires a brain autopsy.

There is an urgent need for research funding, said Rudy Tanzi, a Harvard professor of neurology and director of the Genetics and Aging Research Unit at Massachusetts General Hospital.

With donepezil, “ the improvement is modest and temporary,” he said. At some point, Alzheimer’s patients “fall off the cliff ” and decline rapidly, said Tanzi, who discovered all three genes that cause early onset familial Alzheimer’s disease. “We don’t really know why.”

He called Alzheimer’s a disease of the brain’s synapses, the connections through which information flows between the brain’s nerve cells. Beta-amyloid, the sticky matter found in the brains of Alzheimer’s patients, actually gums up the synapses, and drugs tried so far haven’t been safe or potent enough, Tanzi said.

He has a company testing a drug that clears amyloid from the brain, and he is optimistic about it and another experimental drug, Bapineuzumab, which he called a “passive vaccine” against beta-amyloid. UT Southwestern also is developing a vaccine.

Alzheimer’s costs society $180 billion a year, Tanzi said, but “we spend just $450 million on research. The government is asleep at the wheel here.”

By comparison, spending on research on HIV/ AIDS is $3 billion, according to the National Institutes of Health, although far fewer Americans are diagnosed with HIV/AIDS than with Alzheimer’s: 1.2 million versus 5.4 million.

Tanzi said that with the funding he has, he can do just 2 to 3 percent of “what I know I could do.”

Guynes, the clinic manager where Nash worked, helped him organize a team of 40 former colleagues, patients and family members in the Walk to End Alzheimer’s on Oct. 15. Nash’s group raised more than $5,000, Guynes said.

Nash is reading all he can to educate himself and others about the disease. He thinks it’s to his advantage to be a doctor because he understands what is happening.

And the blog, which he writes in a stream-of-consciousness style without punctuation or capitalization, is therapy for him. It keeps him connected to former co- workers and patients.

“We all keep up with his blog,” Guynes said. “He makes me laugh and cry every day.”

He also keeps busy exercising, gardening and making travel plans with his wife of 37 years.

In the past six months, Nash has watched his brother go from functioning to being unable to dress himself, he said.

“ My wife and I think we’re kind of lucky to know of this early,” he said.

Nash has become more emotional than he used to be, his wife said, and “so much sweeter.” Neither of them fusses over small things.

“Every day is precious,” Jo Ann Nash said. “We just love life. And we love each other. We just feel so lucky.”