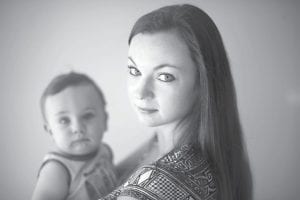 Social worker Shannon Coyne posed for a portrait with her 11-month-old son in Philadelphia. Coyne and her husband decided against circumcision for their son. The nation’s most influential pediatricians group says the health benefits of circumcision in newborn boys outweigh any risks and insurance companies should pay for it. In its latest policy statement on circumcision, a procedure that has been declining nationwide, the American Academy of Pediatrics moves closer to an endorsement but says the decision should be up to parents. (AP Photo/Matt Rourke)

The nation’s most influential pediatricians group says the health benefits of circumcision in newborn boys outweigh any risks and insurance companies should pay for it.

In its latest policy statement on circumcision, a procedure that has been declining nationwide, the American Academy of Pediatrics moves closer to an endorsement but says the decision should be up to parents.

“It’s not a verdict from on high,” said policy coauthor Dr. Andrew Freedman. “There’s not a onesize fits-all-answer.” But from a medical standpoint, circumcision’s benefits in reducing risk of disease outweigh its small risks, said Freedman, a pediatric urologist in Los Angeles.

Their old stance said potential medical benefits were not sufficient to warrant recommending routinely circumcising newborn boys. The new one says, “The benefits of newborn male circumcision justify access to this procedure for those families who choose it.” The academy also says pain relief stronger than a sugar-coated pacifier is essential, usually an injection to numb the area.

The federal Centers for Disease Control and Convention has estimated circumcision costs range from about $200 to $600 nationwide. Coverage varies among insurers and several states have stopped Medicaid funding for circumcisions.

The new policy was published online this week in Pediatrics. It comes amid ongoing debate over whether circumcision is medically necessary or a cosmetic procedure that critics say amounts to genital mutilation. Activists favoring a circumcision ban made headway in putting it to a vote last year in San Francis- co but a judge later knocked the measure off the city ballot, ruling that regulating medical procedures is up to the state, not city officials.

In Germany, Jewish and Muslim leaders have protested a regional court ruling in June that said circumcision amounts to bodily harm.

Meantime, a recent study projected that declining U.S. circumcision rates could add more than $4 billion in health care costs in coming years because of increased illness and infections.

Circumcision involves removing foreskin at the tip of the penis. The procedure can reduce germs that can grow underneath the foreskin, and complications, including bleeding and infection, are rare, the academy says.

Despite the U.S. decline, about half of baby boys nationwide still undergo circumcision, or roughly 1 million each year. The country’s overall rate is much higher than in other developed nations, but U.S. rates vary by region and are higher in areas where it is a cultural or religious tradition, including among Jews and Muslims.

Psychologist Ronald Goldman, director of an anti-circumcision group, the Circumcision Resource Center, said studies show circumcision causes loss of sexual satisfaction — a claim the academy said is not supported by the research it reviewed — and can be psychologically harming. Goldman contends medical studies showing benefits are flawed and that the academy’s new position is “out of step” with medical groups in other developed countries.

The American Congress of Obstetricians and Gynecologists took part in the research review that led to the new policy and has endorsed it. Circumcisions in hospitals are typically performed by obstetricians or pediatricians.

The CDC also participated in the review, and will consider the academy’s updated policy in preparing its own recommendations, a CDC spokesman said. The agency has a fact sheet summarizing circumcision’s potential health benefits and risks but no formal guidelines.

The American Medical Association and American Academy of Family Physicians have neutral policies similar to the pediatrics academy’s previous position.

Philadelphia social worker Shannon Coyne examined medical research on circumcision before her son was born last September and had a tough time making a decision. She learned that a relative’s boy needed reconstructive surgery after a botched circumcision, and that another’s son who wasn’t circumcised developed urinary infections.

Coyne said she and her husband ultimately decided against circumcision, because she didn’t want her baby to have what she considers cosmetic surgery without being able to consent.

Her advice to other parents is “just make an informed decision. Do your research, be open-minded.”

Some 18 states have eliminated Medicaid coverage for circumcision, a trend that could contribute to rising health care costs to treat infections if circumcision rates continue to decline, according to a study published Aug. 20 in Archives of Pediatrics & Adolescent Medicine.