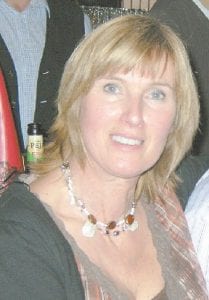 For more than a quarter of a century, Linda De Croock lived with constant pain from a car accident that smashed her windpipe. Today, she has a new one thanks to an operation in which a dead man’s windpipe was implanted in her arm, allowed to grow her own tissue, and later transplanted into her throat. (AP Photo/ Courtesy Linda De Croock)

For more than a quarter of a century, Linda De Croock lived with constant pain from a car accident that smashed her windpipe.

Today, she has a new one after surgeons implanted the windpipe from a dead man into her arm, where it grew new tissue before being transplanted into her throat. The way doctors trained her body to accept donor tissue could yield new methods of growing or nurturing organs within patients, experts say.

The technique sounds like science fiction, but De Croock says it has transformed her life. She no longer takes antirejection drugs.

“Life before my transplant was becoming less livable all the time, with continual pain and jabbing and pricking in my throat and windpipe,” the 54-year-old Belgian told The Associated Press in a telephone interview.

Doctors at Belgium’s University Hospital Leuven implanted the donor windpipe in De Croock’s arm as a first step in getting her body to accept the organ and to restart its blood supply.

About 10 months later, when enough tissue had grown around it to let her stop taking the drugs, the windpipe was transferred to its proper place. Details of the case are in the Jan. 14 edition of the New England Journal of Medicine.

“This is a major step forward for trachea transplantation,” said Dr. Pierre Delaere, the surgeon who led the team that treated De Croock.

For years, De Croock lived with the pain and discomfort of having two metal stents propping open her windpipe. She went looking for doctors who might be able to help her and found Delaere on the Internet.

“I had always wondered, ‘So many things are possible, why not a new windpipe?’” De Croock said.

Delaere and his colleagues, who had performed similar procedures on a smaller scale for cancer patients, agreed. Once the doctors had a suitable donor windpipe, they wrapped it in De Croock’s own tissue and implanted it into her lower left arm. There, they connected it to a large artery to re-establish the blood flow.

De Croock said having a windpipe in her arm felt strange and uncomfortable. “It was packed in with gauze and my whole arm was in plaster,” she said. “So it’s not like (I could) peel potatoes.”

For about eight months, she took drugs to stop her immune system from rejecting the new organ. Though some of the tissue from the windpipe’s male donor remains, enough of De Croock’s own tissue now lines the organ that she no longer needs anti-rejection medicines.

Patrick Warnke, a tissue-engineering expert at Bond University in Australia not linked to De Croock’s case, said it was the first time a donor organ as large as the trachea was nurtured inside the recipient’s own body before being transplanted.

“This shows us that we may one day be able to use patients’ own bodies as bioreactors to grow their own tissue,” he said.

Warnke thought it might be possible to grow parts of organs, like a lung lobe, within patients themselves in the future. Warnke said he has grown parts of a jaw using muscle in a patient’s back.

Last year, European doctors announced they had lined a donor windpipe with tissue grown from their patient’s stem cells, thus eliminating the use for immune-suppressing drugs. Only a handful of windpipe transplants have been performed.

Since operating on De Croock, Delaere and colleagues performed a similar transplant on an 18-year-old man, and two other patients are being readied for the treatment.

Dr. Eric Genden of Mount Sinai Hospital in New York, who has also performed a windpipe transplant, said the Belgian approach was “intellectually interesting,” but would probably not revolutionize how doctors treat patients. He said the technique was too complex and labor-intensive to be easily replicated by other doctors.