Doctors are trying to diagnose autism in babies 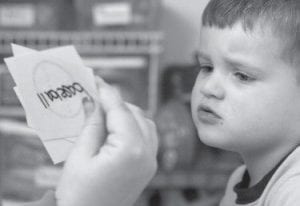 Jacob Day, 3, who is autistic, studies a flash card held by his instructional assistant at his home in Antelope, Calif., on April 24. At 18 months old, Jacob was formally diagnosed with autism, about a year earlier than usual. Before he turned 2, he began daily intensive behavior treatment designed to help him lead a more normal life.(AP Photo/Rich Pedroncelli)

Jacob Day did none of those things.

“We used to say it was like it burned his eyes to look at you,” said his mother, Tamie Day of Antelope, Calif. “It was like a physically painful thing for him. It wasn’t just that he wasn’t looking at us; he was purposefully looking away.”

Day, who has a psychology degree, suspected her son might have autism. She enrolled him in a study, published in April, that found that babies like Jacob are indeed at high risk for autism if they do not respond to their names by 12 months of age.

At 18 months, he was formally diagnosed with autism, about a year earlier than usual. Before he turned 2, Jacob began daily intensive behavior treatment designed to help him lead a more normal life.

He is part of a growing field in psychiatry called infant mental health. Doctors and scientists are increasingly looking for early signs in babies of autism, attention deficit disorder and other mental problems that just a generation ago, scarcely anyone thought could appear in children so young.

Some scientists even believe that intensive treatment in some susceptible babies can actually prevent autism, attention deficit disorder and other problems.

An influential Institute of Medicine report in 2000 helped energize this idea. The report emphasized the plasticity of babies’ brains. It also explained how interacting with babies can change their brain wiring.

Tamie Day noticed the first ominous clue the night she and her husband, Chris, brought Jacob home after his birth.

“We walked in the door and he wouldn’t stop looking at our ceiling fan,” she said. “The next day, that’s all he would look at.”

Babies typically begin making eye contact soon after birth, and “understand at a basic, perhaps hardwired level, that eyes are special – they look more at eyes than at other parts of the face,” said Sally Ozonoff, an autism specialist at the University of California at Davis’ MIND Institute.

When his mother expressed her autism concerns at Jacob’s 6-month checkup, the doctor said “we were being a little overzealous,” Day said.

Still, there was no pointing, no clapping, no shared smiles, and when Jacob would laugh, it seemed like his own private joke. So his parents sought out UC-Davis specialists, who gave them the heartbreaking diagnosis.

Jacob, now 3 1/2, has made meaningful progress thanks to treatment, his mother said, including a breakthrough moment at age 2. It still makes her cry to recall it.

She was giving Jacob a bath, playing the “itsy bitsy spider” finger game, when he looked up and really gazed into her eyes. “He was smiling up at me and I realized that was the first time he had done that,” she said. “He has gorgeous blue eyes, and I was like, `My God, your eyes are so beautiful.'”

Interest in infant mental health has been boosted by awareness of the prevalence of attention deficit disorders and autism, which government officials said in February affects 1 in 150 U.S. children and may be more common than previously thought.

In April, researchers from the federal Centers for Disease Control and Prevention and the Interdisciplinary Council on Developmental and Learning Disorders presented a report emphasizing earlier diagnosis and treatment.

The report said that about 17 percent of U.S. children have a developmental disability such as autism, mental retardation and attention deficit hyperactivity disorder, but that fewer than half are diagnosed before starting school.

The authors say warning signs include failure to:

+ focus on sights and sounds by 2 months.

+ exchange smiles and sounds with parents by 8 to 9 months.

Last year, the American Academy of Pediatrics recommended that pediatricians routinely evaluate children for developmental problems such as autism starting in infancy, and begin testing at age 9 months.

“Waiting until a young child misses a major milestone such as walking or talking may result in late rather than early recognition … depriving the child and family of the benefits of early identification and intervention,” the academy said.

Some critics worry that the trend will trigger needless diagnoses in children with normal variations in behavior.

Dr. Michael Fitzpatrick, a London physician, said that while early recognition and treatment of true disorders are important, “the extension of these categories to include 20 to 30 percent of all children reflects a social trend of pathologizing and medicalizing children’s lives, which seems to reflect difficulties of parents and teachers in dealing with familiar problems of childhood development.”

Dr. Stanley Greenspan, a psychiatry professor at George Washington University who co-authored the CDC-Interdisciplinary group report, said the idea is not to slap a label on babies and give them medication. Greenspan said the goal is to raise awareness about early warning signs and to encourage treatment to increase the chances that children can develop normally.

Research on identifying early clues and testing treatments is booming. For example:

+ Dr. Fred Volkmar at Yale University is studying potential ways to diagnose autism in the first months of life, including whether looking at objects rather than people is a sign. “I think we’re on the verge of being able to do a much better job” of diagnosing autism in infancy, Volkmar said.

+ Researcher Stephen Porges at the University of Illinois at Chicago is starting a five-year study of whether excessive crying past 6 months of age might be an early sign of autism, attention deficit or other behavior problems.

+ Greenspan is launching a multimillion dollar study involving parents and babies at risk for autism or attention deficit disorder. One group will receive intensive behavior training, the other will not; both will be compared through age 5.

While rigorous scientific evidence is needed to prove that early intervention succeeds, Greenspan said his work with patients has shown promise.

He gets 33 hours of weekly home treatment with trained college students, including six hours most days. The tab is $70,000 yearly, paid for by California, one of the few states that pay, through state and federal funds, for early intensive autism treatment.

Jacob’s sessions involve lots of repetition, and rewards, including praise and treats, for a job well done. For example, to improve eye contact, teachers bounce him on a favorite giant ball, then stop. If he turns to look at them, he gets praise, maybe a piece of candy.

To teach language, they use activities like swinging that get him excited enough to make sounds, then offer rewards for sounds like vowels or consonants rather than humming. Then they name objects, encourage mimicking, and offer more rewards.

Now he knows the alphabet, understands commands like “Bring me the cow and the horse toy,” and can say simple sentences like “I want juice,” his mother said.

“We definitely hope to mainstream him. We hope that he will have a job and have a life where he can take care of himself and be happy,” said Day.