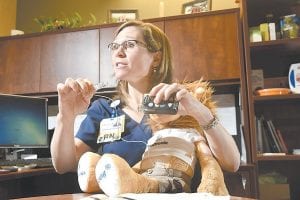 While the number of patients fighting diabetes continues to grow in many states, doctors are encouraged by new treatment options they say may help prevent, or at least lessen, the impact of the chronic disease.

About 9 percent of the U.S. population has diabetes, but the rate in Tennessee is close to 15 percent, said Kimberly Miller, a nurse and diabetes educator in CHI Memorial’s Diabetes and Nutrition Center. Tennesseans, like their neighbors in Kentucky, are fatter than the national average and get less exercise, two factors that often lead to Type 2 diabetes, the most common form of the disease.

Untreated, diabetes can cause eye, kidney, and heart problems, or even death.

But diabetes specialists hope new technology and improvements in some oldfashioned techniques will help lower the number of people who get the disease and make it easier for those who have it to control their illness.

Diabetes is caused when the body is unable to manufacture sufficient insulin, or becomes resistant to it. Insulin is needed to break down sugars in food to provide energy to the cells in the body. 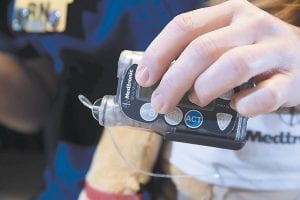 In its early stages, diabetes can be treated with exercise and changes in diet. But for certain types of diabetics, where the body is producing little or no insulin or has become resistant, a more aggressive approach is needed.

The normal way of treating full-blown diabetes is for patients to inject insulin before every meal and at bedtime. To gauge the proper dose, patients must test their blood sugar levels using a blood sample inserted into a device. Then they must inject insulin through a syringe, normally in the stomach or abdomen.

The process is timeconsuming, painful and awkward. But new medical devices show promise for getting rid of at least some of the blood work, although they are not appropriate for all diabetics.

One category of device measures blood sugar levels automatically. The patient wears a patch or has a small tube (a catheter) inserted under the skin that measures blood sugar on a regular basis and transmits readings to a larger piece of equipment that displays the levels.

With a monitor, a patient can see their blood sugar, or glucose, levels rising or falling in time to take preventive action, Miller said. Some devices also transmit data remotely so family members or friends can help monitor patients and call for help if their blood sugar levels are getting out of line and the patient is doing nothing to correct them.

“The devices have been around for some time, but they used to be very inaccurate and difficult to use,” said Dr. Ashley Shoemaker, a Vanderbilt University Medical Center professor whose clinic treats some 2,500 diabetic children annually. “Now they have become accurate enough that people are allowed to make medical decisions based on their numbers.”

But once the patient gets a reading, he or she still needs to measure the proper amount of insulin and inject it. And until recently, patients also needed to take a blood sample a couple of times a day to be certain the device was working properly, Shoemaker said.

Being able to constantly monitor blood sugar levels is particularly important for people with Type 1 diabetes, sometimes referred to as juvenile diabetes, she said. Type 1 diabetes is rarer than Type 2, occurring in only about 5 percent of the population, but it can be harder to control because the pancreas does not produce any insulin at all, so regulating the insulin level artificially is critical.

Some Type 1 diabetics are now using a pump that can inject insulin on a regular basis. By giving regular small doses instead of irregular large doses, the pump can level out a patient’s blood sugar levels.

“They are really small,” said Dr. Asma Khan, an endocrinologist and diabetes specialist with Erlanger hospital. “The needle that goes under the skin is very thin, and then there is a tube that goes into the pump, that then goes into their pocket.”

But not every patient likes the pump, she said. “ Having something attached to their body, for some people that is strange,” she said. “Some people feel that an injection is easier than working with the pump, which has buttons, and takes some working with.”

The Holy Grail of a selfcontained unit that would constantly monitor a patient’s blood sugar level and adjust the insulin injections automatically, with no need of calibration, is still several years away, diabetes specialists agreed.

A new device from Medtronics set to go on sale in March, the MiniMed 670G, is getting a lot of attention, because it promises to combine the glucose monitor with the insulin pump. Other manufacturers are expected to offer their own comparable gear in a few months, Shoemaker said.

“I don’t think we’re that close to a cure or anything that’s going to completely take the patient out of the loop,” said Vanderbilt’s Shoemaker. “As the technology continues to advance, we are hopeful that the human factor will become less and less burdensome.”

But University of Tennessee College of Medicine diabetes specialist Dr. Jim Bailey believes that an increased focus on traditional ways of dealing with the disease may have a greater impact, although he wants to combine those old-fashioned ways with a modern twist.

Bailey agrees that devices such as the sensor patch and insulin pump are important for some people whose body is producing no insulin or is rejecting it. But he believes most diabetics should spend more time focusing on their diet and exercise.

Bailey knows that if doctors just tell people to eat more broccoli and fewer french fries, it is unlikely that patients will comply — they need more incentive to change bad habits. So he has been testing two alternative approaches: one using text messages and the other a live person, a health coach.

First, the patient discusses his goals with his doctor. Then the doctor’s office sends out regular text messages, as many as twice a day, asking patients how they are doing in meeting those goals. “They are motivational text messages tailored to the patient’s interests,” he said, “whether it is working on weight loss and healthy eating or in increasing a patient’s activity or in taking their medicines correctly.”

“Doctors only have time for a short little visit and only a little bit of time to work on goal setting and working on lifestyle changes and how patients are taking their medicines,” Bailey said. But the health coach can spend much more time with the patient. “What has been shown is that coaches really can help people increase their vegetable intake, decrease sugary food intake, increase their physical activity and get better control of their diabetes and feel better as well,” he said.