Money saved from stopping plans to build a new federal prison in Letcher County would be used on “enforcing immigration laws” and “improving national security,” the Trump administration says in a document prepared to justify the halting of the project and taking back the $505 million that has been allocated to it.

The Department of Justice document also lists the presumed inability of local residents to meet “strict qualifications,” the “unique topography” of the area, declining prison populations, and the use of private prisons and purchased facilities as the construction should be halted.

The U.S. Bureau of Prisons, a part of the U.S. Department of Justice, is going ahead with its plan to withdraw the Record of Decision that had cleared the way for construction of a federal prison in Letcher County.

The Bureau placed a public notice advertisement in this week’s edition of The Mountain Eagle saying the decision will be withdrawn, and that notice will also be published in the Federal Register.

The notice cites “new information, which may be relevant to the environmental analysis of the proposed action,” however budget documents seeking to take back $505 million in unspent appropriations for the prison list mostly economic reasons to eliminate the prison.

Both budget proposals the Trump administration has sent to Congress have included provisions to take back the money approved during the final year of the Obama administration.

The document from the administration, titled “2020 Major Savings and Reforms,” says the Department of Justice intends to “reallocate funding to other national priorities, including maintaining Federal law enforcement capacity, improving national security, and enforcing immigration laws.”

“Given the declining prison population has reduced capacity demands, new construction is more costly than purchasing existing unused facilities, prison construction has not been shown to spur local economic growth, and complications associated with the Letcher County site have contributed to increased costs and significant delays, the budget does not support the construction of this prison,” the document says.

The document says overall prison population is down 16 percent since 2013, and that high security prisons are now only overcrowded by 25 percent, down from 54 percent six years ago. It said that of the three methods the Bureau of Prisons uses to alleviate overcrowding, contract incarceration, purchase of existing unused prisons, and construction of new prisons, construction is the least cost-effective, and the Letcher County prison would cost 38 percent more than the average US penitentiary.

“On average, construction of a new facility costs approximately $370 million, while the Letcher County facility is projected to cost $510 million,” the request says. “In contrast, BOP purchased AUSP Thomson in 2012 for just $165 million.”

AUSP Thomson is a former Illinois state prison purchased by the federal government in 2012 to house accused terrorists transferred from Guantanamo Bay. Congress blocked the use of the prison for that purpose, instead reserving it to ease overcrowding elsewhere in the prison system.

The reasons given for cutting the Letcher County prison also include a paragraph saying prisons do not contribute to local economic growth, in part because they are first staffed with experienced employees from elsewhere in the prison system. While the new document does not state the percentage of employees that would be hired from outside the area, it opines that most local residents would not be qualified to work there.

“Further, research has suggested that the strict qualifications for Federal law enforcement related to education and professional experience may preclude many local residents from being able to take advantage of these positions,” the report says. “Therefore, prison construction largely does not provide economic growth in rural counties, and in fact, may impede it.”

Footnotes for the report reference three journal articles, at least two of which appear to be related to the prison abolition movement. One of those two is cited in a letter of opposition written by Emily Posner, an attorney with the Abolition Law Center, which has filed suit to stop the prison. Another other is derived from data from the Prison Policy Initiative, which says it “produces cutting edge research to expose the broader harm of mass criminalization, and then sparks advocacy campaigns to create a more just society.”

The fourth source is a 2010 Congressional Research Service report on prisons.

The final reason given for taking back money from the project is listed as “project complications.” No details about those complications are given, however, the report mentions the topography of the area, and problems acquiring property.

“ Letcher County ’ s unique topography has proven to be a complication for the project. As the proposed site is situated on the former site of a mountaintop coal mine, the unique challenges related to access, utilities, and environmental impact have contributed to increased costs and significant delays,” the report says. “The agency continues to struggle to acquire land from the multiple landowners currently in possession of the property.”

Elwood Cornett, co-chair of the Letcher County Planning Commission, which has been working on the prison project for about 15 years, said he was not aware of any issues with property acquisition, other than those already addressed earlier when the size of the property needed was reduced. He said he is only aware of one property owner who had talked to the bureau recently, and that person seemed satisfied with the negotiations.

Cornett blamed the delay on the lawsuit filed by the Abolition Law Center, which he characterized as “full of foolishness.”

Cornett said he still has hopes that the project will continue.

“( Congressman) Hal Rogers said the Bureau of Prisons told him they’re going ahead and working on it,” Cornett said.

Eagle from a week ago.

U.S. Senator Mitch McConnell, through his press secretary, said, “Congressman Rogers and I have made great progress in directing much-needed federal resources to this community. Together, we will continue to work to ensure the Letcher County prison project moves forward.”

She referred any further questions to the administration. 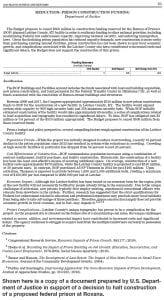