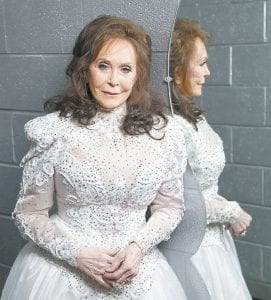 Loretta Lynn poses for a photo at the Municipal Auditorium in Nashville, Tenn. The country icon’s Appalachian musical roots are explored on a new “American Masters” documentary on PBS as well as her first new studio album in a more than a decade, “Full Circle,” both debuting on March 4. (Photo by Donn Jones/Invision/AP)

When Loretta Lynn was growing up in Butcher Hollow in Kentucky in 1930s, her home in the coal mining community was always filled with music, either from her own voice echoing through the trees or the sound of the Carter Family’s songs.

The country icon’s Appalachian musical roots are explored on a new “American Masters” documentary on PBS as well as her first new studio album in a more than a decade, “Full Circle,” both debuting Friday.

Lynn, who was the second of eight children in her family, said her daddy played the banjo and her mama played the guitar and nearly everyone in the “holler,” as she pronounces it, could sing or play as well.

“I was singing when I was born, I think,” said the 83-year-old singer during an interview in Nashville, where she was taping a new music video with Willie Nelson. “Daddy used to come out on the porch where I would be singing and rocking the babies to sleep. He’d say, ‘Loretta, shut that big mouth. People all over this holler can hear you.’ And I said, ‘Daddy, what difference does it make? They are all my cousins.’” 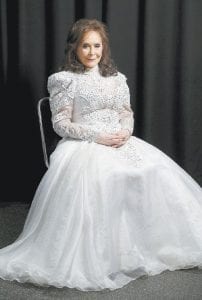 Loretta Lynn’s eastern Kentucky musical roots are explored on a new “American Masters” documentary on PBS as well as her first new studio album in a more than a decade, “Full Circle,” both debuting on March 4. (Photo by Donn Jones/Invision/ AP)

The documentary, “Loretta Lynn: Still a Mountain Girl,” chronicles Lynn’s remarkable rise from a “Coal Miner’s Daughter” to a country superstar who wrote frank songs about her upbringing and her experiences as a wife and mother.

Although her rags-to-riches story is already well known thanks to a best-selling autobiography and Oscar-winning film starring Sissy Spacek, Lynn has never before recorded many of the Appalachian songs that inspired her career. Her last album, “Van Lear Rose,” produced by rocker Jack White, earned her two Grammys in 2005.

“Some of them were songs I sang when I was just a little girl,” Lynn said. “I didn’t dream any of them would get on this album.”

It was fitting then that producer John Carter Cash, the son of June Carter and Johnny Cash, helped her revisit some of these songs, including a couple of Carter Family standards, “Black Jack David,” and “I Never Will Marry.” The Carters were a musical dynasty from just over the Appalachian Mountains in Virginia — led by A.P. Carter, his wife, Sara, and his sister-in-law Maybelle — who wrote legendary songs like “Keep on the Sunny Side,” ‘’Wildwood Flower” and “Will the Circle Be Unbroken.”

“The Carter Family was the first songs I ever heard,” Lynn recalled. “I was just 2 or 3 years old, maybe a little older. But I remember climbing up on Daddy’s leg and Daddy was playing the old Victrola and playing Carter Family records.”

Cash, who is the grandson of Maybelle Carter, said recording with Lynn at his Cash Cabin studio in Hendersonville, Tennessee, felt like a family project. They have recorded over 100 songs, some of which will be released on subsequent albums on the Sony Legacy label.

“There was just an immediate magic in the studio together,” Cash said. “To me, it was a lot like working with my mom again. Loretta’s sense of humor, her creative drive and just the very nature of her being felt like home.”

She also recorded another song from her childhood, “In the Pines,” an Appalachian folk traditional dating back to the 1870s that has been sung by everyone from Bill Monroe to Lead Belly. Over a simple guitar and banjo tracks, Lynn’s steady vocals evoke that high lonesome sound.

The album starts with the very first song she ever wrote, “Whispering Sea,” which was the b-side to her first recording, “I’m a Honky Tonk Girl,” released in 1960. Also included is a new version of “Fist City.”

Lynn made her name on songs like “You Ain’t Woman Enough” and “Don’t Come Home A’Drinkin’” that were gritty and realistic and sometimes based on her own difficult marriage to Oliver “Doolittle” Lynn.

“It was what I wanted to hear and what I knew other women wanted to hear, too,” Lynn said. “I didn’t write for the men; I wrote for us women. And the men loved it, too.”

“But who is going to miss me when I do?” she asks.