Does having Brad mean Dad stays? 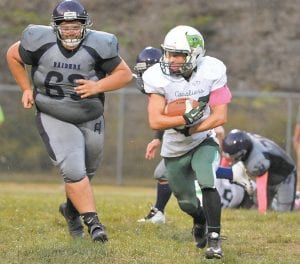 Having his son on the team could guarantee that Kentucky coach John Calipari will be at Kentucky the next four or five years. Or at least that is what Calipari recently told ESPN.

Brad Calipari is a freshman walk-on at UK and is excited about the opportunity to be part of the program he has become so enamored with since his father left Memphis for Lexington in 2009.

However, he has no idea what this year will be like basketballwise.

“Dad has never coached me. I don’t know how it will be,” said Brad Calipari. “I don’t think it will be too different. We will have an opportunity to be together in team settings. I’m glad I will get to experience that.”

After playing at MacDuffie School, a Massachusetts prep school, to improve his skills after starting his high school career at Lexington Christian Academy, he had choices of where to play his college basketball. He knew the pressure and scrutiny he would face playing for his father, but he also understood what the program was all about. 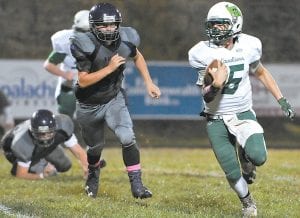 Above, Jenkins running back Audie Fields escapes a South Floyd defender during the Cavalier’s win. At right is Jenkins quarterback Darian Slone, also making a successful run with the football. (Photos by Teddy Paynter)

“It came down to couple of schools but at the end of the day it came down to my relationship with the players and coaches here. I will be going against NBA guys every day,” Brad Calipari said.

He seemed to always be with DeMarcus Cousins during his father’s first year at UK. Sometimes the coach indicated the two had about the same mindsets off the court to motivate the playful Cousins.

But it is Karl-Anthony Towns that Brad Calipari says he is closest to among his father’s former UK players.

“We met about my eighthgrade year. From the first day me and him just kind of clicked,” Brad Calipari said. “We just always had that brotherly bond to where we can talk about a lot of things. He is great. Very funny, very down to earth.”

The Kentucky coach likes the way his son worked out on his own during the summer. He can shoot and John Calipari says if he does not turn the ball over, he can possibly play when the Cats are up by substantial margins like other walk-on players often do. 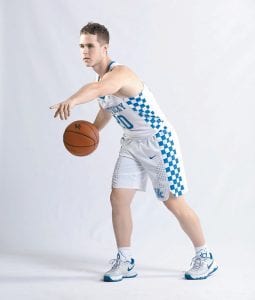 The UK coach jokes that his wife, Ellen, thinks her son is going to play more than that and says she “is out of her mind” when it comes to her son.

“Mom and Dad have both had a big influence on me. She obviously knows a lot less about basketball. But I am a mama’s boy. She has helped me a lot,” Brad Calipari said.

The coach’s son also has one other reason for being at UK — he hopes to one day be a coach himself. His father is now a Hall of Fame coach — “I could not be more proud of him and that’s part of what makes this such a great opportunity to play for him,” Brad Calipari said — and has agreed to help him pursue his goal just like he would any other player.

“I have always wanted to coach. Probably more college than the NBA,” Brad Calipari said. “It runs in my blood. I’m not sure what kind of coach I would be. Probably like him (his father).”

John Calipari will encourage his son to study what the UK coaches do, pay attention to video work and get a full grasp of what is involved in coaching during his years at UK.

Brad Calipari wants no preferential treatment, and knows he won’t get any. He also sees no potential problems with teammates because his father is the head coach.

“They don’t look at me any differently. They treat me just as well as anybody,” Brad Calipari said.

Why not? He says the biggest perk of being at UK is that he can get into the gym whenever he wants to shoot. “Instead of going to parties, I can go to the gym,” Brad Calipari said.

Former Kentucky tight end James Whalen is thrilled to have been named a SEC Legend who will be honored at Atlanta in December during the SEC championship weekend.

However, one thing about his UK career still bothers him — UK’s loss to Syracuse in the Music City Bowl after the 1999 season. Whalen had four catches for 80 yards midway through the first quarter. Kentucky had a 7-0 lead and was driving for another score when Whalen dislocated his elbow after his fourth catch.

“I will be on my death bed and still be angry about that deal,” said Whalen, who now lives in Aledo, Texas with his wife and two children. “We were fixing to win. Me and (quarterback) Dusty (Bonner) were in a groove. We had an amazing game plan set up. The Syracuse defense was confused and did not know what was going on.

“Seven minutes into the first quarter I had four catches for 80 yards. I caught the ball, Will Allen hit me and I landed on my hand. My elbow bent the wrong way. We settled for a field goal and after that the offense just stopped. I am still a little upset if you can’t tell.”

He had no major college scholarship offers after his prep career in Oregon and played one year at Shasta Junior College in California before his father got transferred from Portland to Covington. His parents were not thrilled about the “educational level” of what Whalen was doing at Shasta and offered to help him pay for school if he changed schools.

The first place he went with the highlight tape his mother made was Kentucky and he happened to get a chance to meet with then-coach Hal Mumme.

“I also knew Kentucky had a great quarterback named (Tim) Couch. I just thought it would be a great opportunity,” Whalen said. “I think Hal was excited to have me, but none of us anticipated the way things would work out how they did. There’s a lot of timing involved in life.”

He played in 33 games at Kentucky. As a sophomore, he had seven catches. The next year he was converted from wide receiver to tight end and had 23 catches and three touchdowns. His senior year he turned into an All-American with 90 catches for 1,019 yards and 10 touchdowns. He led tight ends nationally in all three categories.

The only other UK players with a 1,000-yard receiving season are Craig Yeast, Stevie Johnson, Keenan Burton and Randall Cobb. Johnson, Burton and Cobb all did it after Whalen.

He tries to watch Kentucky play as often as he can, but admits it has been hard because of the team’s struggles. Kentucky went to the Outback Bowl and Music City Bowl in Whalen’s last two seasons.

“I want them to be good. When I was there I wondered why Kentucky could not be highly competitive in two sports. Basketball is big business and I get that, but we were winning seven or eight games a year and being competitive,” Whalen sad. “To watch them not being competitive is very disheartening.

“They are spending good money on facilities and coaches. It just not make sense not to be winning. I understand players win games. Coaches get all this money, but if they do not get players, they do not win. (John) Calipari is a great basketball coach, but his best attribute is his recruiting. If you get players, you usually win. It’s not complicated.”

New Western Kentucky coach Rick Stansbury says he’s willing to consider any option to find a way to get Kentucky on a future schedule or schedules. Stansbury competed against UK annually as a head coach at Mississippi State and then recently as assistant coach at Texas A&M.

He is much like former LSU coach Dale Brown. He always compared his program to Kentucky and was always aiming to compete with UK even if he didn’t recruit McDonald’s All-Americans to Starkville, Miss., like UK coaches brought to Lexington.

“I have nothing but respect for Kentucky. When we were recruiting, I would always ask our coaches if we could beat Kentucky with this player,” Stansbury said. “We want guys here (at Western) to compete with Kentucky. They don’t have to be as good starting out, but we want them able to compete. I don’t want a guy who can play for me. I want a guy who can win.

“I am in heaven in Bowling Green. We have everything it takes. Great town, beautiful campus, great facility. We have something even Kentucky does not have — skyboxes. Sure, we only seat about 8,500, but how many places in the SEC other than Kentucky are full or have more than 8,500? Tell me why we can’t sell out? We did it at Mississippi State for 11 straight years and we are going to make Western the same type place.”

He knows Kentucky fans are among the most passionate in the nation. He wants Western basketball fans to be the same.

“We are going to get Western Kentucky back to where we are competing in this state. All you Western Kentucky folks start believing. We don’t have to take a backseat to anybody. That’s not arrogant. We are going to get this going,” Stansbury said. “If you do not have tickets you better get them because there will come a time real soon that no tickets will be available.”

Getting Kentucky on the schedule would only add to that enthusiasm.