Does the state have your property? 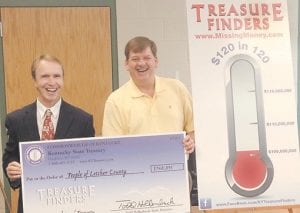 Kentucky State Treasurer Todd Hollenbach will be in Letcher County Tuesday morning to lead volunteers in search of the owners of more than $700,000 in unclaimed property.

Joined by Letcher County Judge/Executive Jim Ward, Hollenbach will direct a group of local volunteers to establish a phone bank, review the list of claimants and call residents to inform them of potential unclaimed property.

Claimants can come to the Letcher County Courthouse, located at 156 East Main Street in Whitesburg, at 10 a.m. on June 24 and meet with Treasury staff that will help them begin the claims process.

Each year, the Kentucky Treasury takes custody of millions of dollars in property that is presumed lost or abandoned. Treasure Finders is a statewide proactive outreach developed by Hollenbach to notify potential claimants of cash or tangible property being held by the Kentucky State Treasury.

For Letcher County, the State Treasury is currently holding approximately 6,867 properties valued at $748,865.

“My goal is to visit all 120 counties in the state, hold a Treasure Finders’ event and return at least $100 million before my service as treasurer ends in 2015,” Hollenbach said.

So far a record $107 million has been returned in Kentucky under the Treasure Finders program.